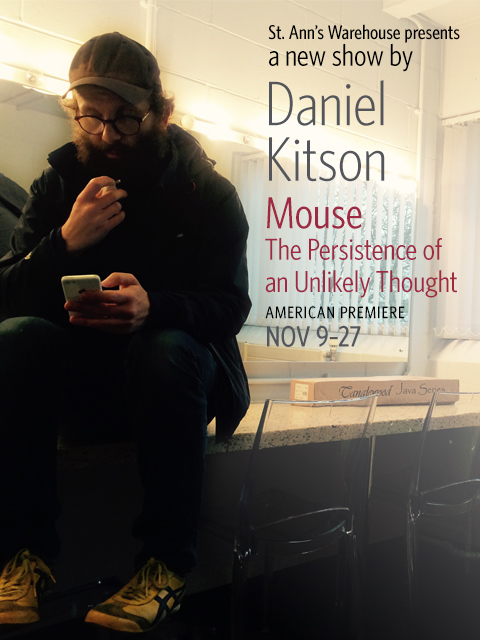 The incomparable Daniel Kitson returns to St. Ann’s Warehouse for the American debut of Mouse — The Persistence of an Unlikely Thought, a brand new solo work about friendship and loneliness, doubt and hope. Mouse “speaks to all those who have wondered about the lives they didn’t live and at the relationships we form with strangers, acquaintances and — that most precious thing — real friends.” (The Guardian) Join us on another far-out adventure into the brain of this “monologist extraordinaire!” (The New York Times)

Runtime:  1 hour and 40 minutes, no intermission.

A few years ago, quite suddenly, I thought of something.

An implausible story about a mouse.

Since then, whenever starting a new show, faced with the empty page and the endless possibility and the looming deadline I have tried and failed to find a way of telling that particular story. Every structural gambit or presentational conceit feeling both oddly insufficient and insufficiently odd. And so, every time, eventually, I’ve abandoned the mouse and I’ve moved on. I’ve had a different idea, for a different story and I’ve written a different show.

This time was no different, again I wanted to tell that story and again I didn’t know how.

And then, quite suddenly, I thought of something else.

An implausible story about a phone call.

And here we are.

“Kitson has an uncommon gift for sustaining...sprawling but carefully crafted narratives...One of the more pleasurable entertainments life has to offer…” –THE NEW YORK TIMES
Read Ben Brantley’s Review

"Mouse moves up close on silent feet, startles you and then whisks itself into a cranny in your consciousness…Brisk and funny and lovably fussy." –TIME OUT NEW YORK
Read more

...one of the most exciting minds in British theatre... the match of his skills and the structure of the play [make] it a remarkable journey. –THE LIST [Edinburgh Festival] Read more

...one of the most remarkable exponents of solo theatre in the UK, if not in Europe... a master storyteller at the height of his powers. –THE SCOTSMAN Read more

saw Mouse by Daniel Kitson at @traversetheatre last night and we were blown away. What a wonderful piece of theatre! #edfringe

Mouse by Daniel Kitson is the best piece of theatre I've seen in years! Funny, moving and engaging from start to finish.