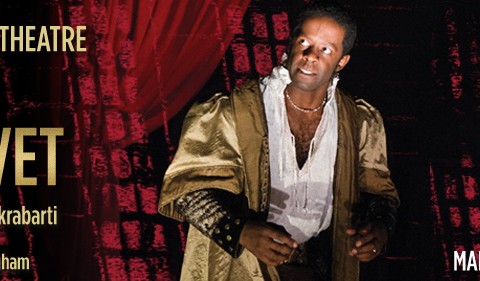 Theatre Royal, Covent Garden, London, 1833. Edmund Kean, the greatest actor of his generation, has collapsed on stage while playing Othello. Ira Aldridge, a young black American actor, has been asked to take over the role. But as the public riots in the streets over the abolition of the Slavery Act, how will the cast, critics and audience react to the revolution taking place in the theater?

Adrian Lester gives a mesmerizing, must-see performance in Red Velvet — a heartbreaking new drama that is both “fiery and funny in equal measure” (Time Out London). The play received five and four star reviews from every major London publication during its sold-out World Premiere in 2012, and has completely sold out its return engagement at the Tricycle this winter.

Back to 2013-2014
—The Independent on Sunday, The Sunday Telegraph
—The Times [London], Financial Times, The Guardian, Time Out London, Evening Standard
RED VE­LVET IS THE PLAY TO SEE. A SUPERB ENSEMBLE directed by Indhu Rubasingham from Lolita Chakrabarti’s excellent script. The audience was clearly awestruck.
—Regina Weinreich, The Huffington Post
FRANKLY, THRILLING. CHARLOTTE LUCAS AND ADRIAN LESTER BURN THE PLACE DOWN.
—Helen Shaw, Time Out New York
Learn more about Red Velvet
READ THE NYTIMES REVIEW
VIEW PHOTOS FROM REHEARSALS