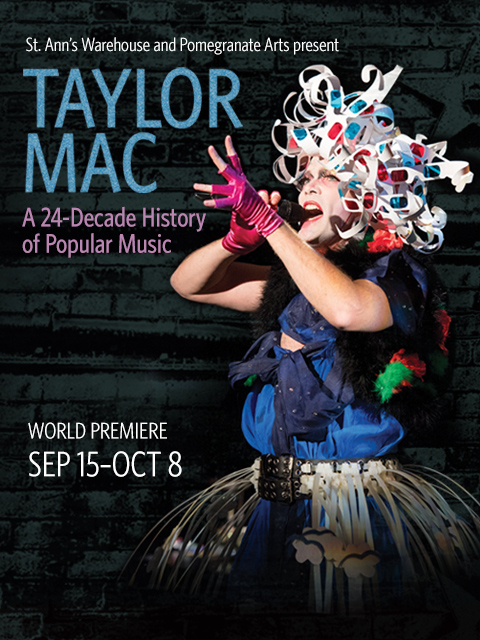 24-Hour Marathon | Oct 8-9 | Noon – Noon
Extremely limited block of tickets just released! Tickets: $600
TICKETS>>
A highly anticipated event 5 years in the making: Taylor Mac performs all 24-decades from 1776 to the present day in 24-hours.
There is no member-priced discount for the 24-Hour Marathon due to the limited number of seats.

READ THE FAQ FOR ADDITIONAL DETAILS >>

“Fabulousness can come in many forms, and Taylor Mac seems intent on assuming each and every one of them.” – The New York Times

ACT I: 1776-1806 | Thu Sep 15
Founding Father Drag, Women’s Lib, and Crazy Jane
The American Revolution from the perspective of the Yankee Doodle Dandy and an epic battle between drinking songs and early Temperance songs. Starts with an orchestra of 24.

ACT II: 1806-1836 | Sat Sep 17
Young Love, Blindfolds, and Murder Ballads
Destined for Broadway, this romp through such chestnuts as “Old Oaken Bucket”, “An Apparition of a Dandy” and that #1 hit, “Poor Little Gypsy” is certain to be a surefire sensation, if not the greatest jukebox musical in the history of mankind.

ACT IV: 1866-1896 | Thu Sep 22
Circus, Mikado, and the Oklahoma Land Rush
A dinner theater production of The Mikado set on Mars, plus the queerest land grab in history.

24-Hour Marathon | Sat Oct 8
A highly anticipated event 5 years in the making: Taylor Mac performs all 24-decades from 1776 to the present day in 24-hours.

READ THE FAQ FOR ADDITIONAL DETAILS >>

A 24-Decade History Of Popular Music at St. Ann’s Warehouse was made possible with funding by Diane L. Max, Andrew J. Martin-Weber, National Endowment for the Arts, New England Foundation for the Arts’ National Theater Project, the Arch and Bruce Brown Foundation, The MAP Fund, a program of Creative Capital, primarily supported by the Doris Duke Charitable Foundation, and The Andrew W. Mellon Foundation.

This work was developed with the support of the Park Avenue Armory residency program, MASS MoCa (Massachusetts Museum of Contemporary Art), and the 2015 Sundance Institute Theatre Lab at the Sundance Resort with continuing post-lab dramaturgical support through its initiative with the Andrew W. Mellon Foundation.

Back to 2016-2017
I have but 300 words to review Taylor Mac’s concert extravaganza… My remaining 270 should simply be: ‘Go!’
—Time Out New York Critics' Pick
Mac’s musical survey … is offered in the spirit Whitman had in mind when he said that he heard America singing.
—The New Yorker
Taylor Mac seduces you, breaks your heart, patches it back up again and sews sequins along the scars.
—The Irish Times
Learn more about A 24-Decade History of Popular Music
Visit Taylor Mac's Website