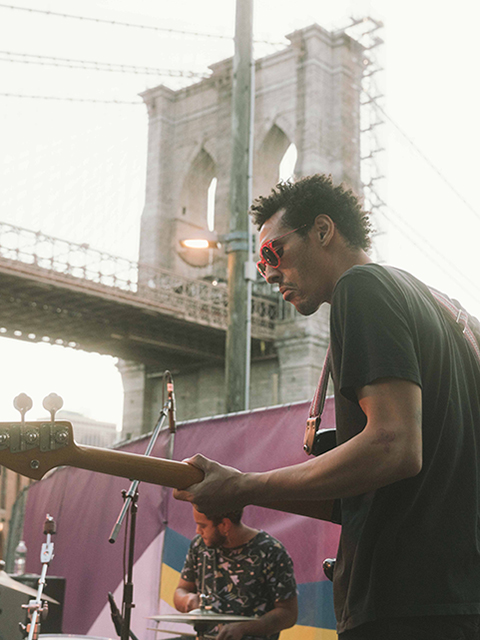 After a successful launch last summer on the roof of St. Ann’s Warehouse, we are pleased to announce the return of our free outdoor series, Get Back! The Dock Street Concerts — this time, right outside our doors in Brooklyn Bridge Park.

Get Back! is a series of live concerts by world-class musicians, sending artists back to work and bringing live music to people strolling or hanging out in Brooklyn Bridge Park. Named for the Beatles’ legendary surprise performance on the roof, artists have the chance to play together again — for some, their first time in over a year — and audiences the rare nourishment of an in-person concert. 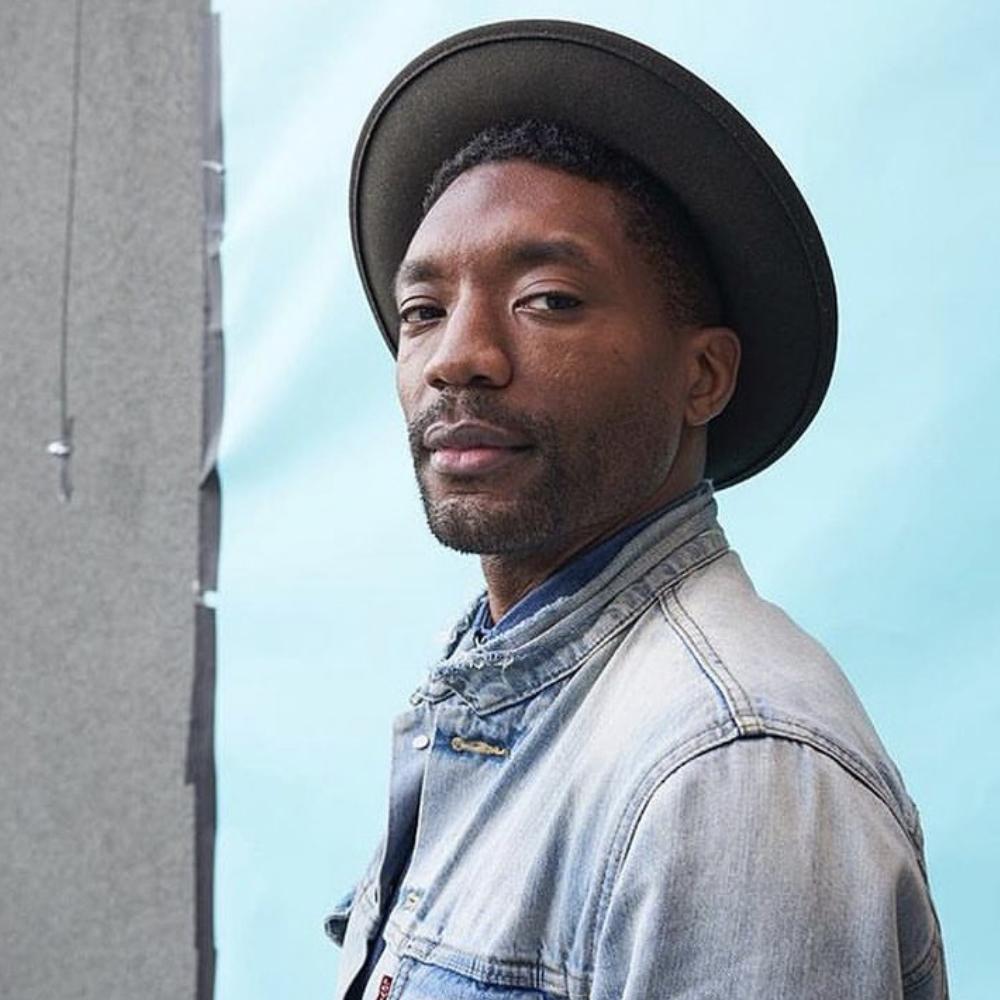 THE BLK HRS are a sonic collective led by artist Cyrus Aaron. They use storytelling & sound to curate a frequency for audiences to unplug and find their vibe. It’s not church, but it is a soul experience.
#theblkhrs 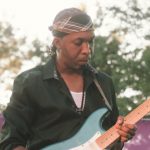 Smooth grooves are the characteristic of the groundbreaking, pandemic-era Black Summer project from producer powerhouse siblings Marcus Machado (@officialmarcusmachado) and Vicky Casis (@_casis_) aka Mach-7 Muzik (@mach7muzik). Thoughtful lyrics and effortless rhythms feel designed to carry the listener away to sweeter times while adding a new sound and vibe to the hip hop world tying roots across genres including rock, funk and soul.

About “The Cypher”:
“The Cypher” is a jam session presented by Mach 7 Muzik that includes a mixture of musicians, singers, rappers, poets and all-around creatives collaborating, connecting, and reimagining classic sounds. 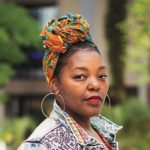 Mahogany L. Browne is the Executive Director of JustMedia, a media literacy initiative designed to support the groundwork of criminal justice leaders and community members. This position is informed by her career as a writer, organizer, & educator. Browne has received fellowships from Agnes Gund, Air Serenbe, Cave Canem, Poets House, Mellon Research & Rauschenberg. She is the author of recent works: Chlorine Sky, Woke: A Young Poets Call to Justice, Woke Baby, & Black Girl Magic. As the founder of the diverse lit initiative, Woke Baby Book Fair. Browne’s latest project is a poetry collection responding to the impact of mass incarceration on women and children:  I Remember Death By Its Proximity to What I Love (Haymarket Books),  She was recently named the first-ever Poet in Residence at Lincoln Center. She lives in Brooklyn, NY. 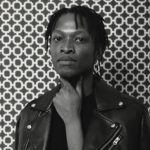 Vuyo (Vuyolwethu) Sotashe is a New York based vocalist, composer, and performer originally from South Africa. Since moving to the United states as a Fulbright Scholar, he has performed with celebrated jazz legends including Dee Dee Bridgewater, Jimmy Heath, George Benson, Al Jarreau, Barry Harris, and Winard Harper, to name a few. He is the recipient of the Van Lier Fellowship for Music at Joe’s Pub/Public Theater for 2018-2019 and has collaborated and performed in Somi Kakoma’s debut theater work “Dreaming Zenzile”, which was premiered at Joe’s Pub, as well as the Apollo, and made his commercial-off-broadway debut as part of the cast in “Black Light”. His most recent collaborative theater project was Ohio (St. Ann’s Warehouse/The Bengsons). Currently, he performs as one of the fronting vocalists in the internationally touring, multi-disciplinary band collective Mwenso and the Shakes.
@vuyosotashe | Instagram 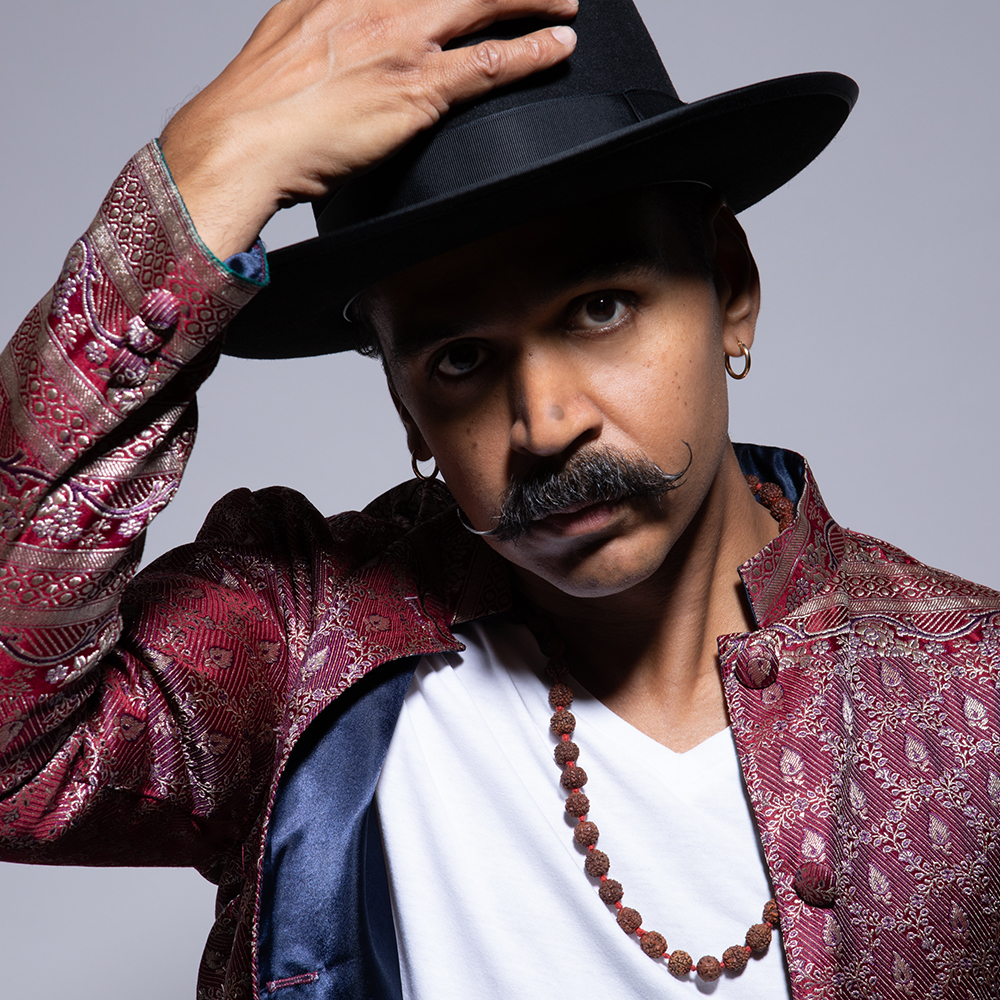 Sunny Jain’s Wild Wild East (Smithsonian Folkways 2020) encompasses myriad facets of Jain’s identity both as a first-generation South Asian–American and as a global musician, from his own family’s immigration story to his eclectic musical upbringing. In recasting the immigrant — steeped in the courage to leave a familiar homeland for a new beginning — as the modern-day cowboy and cowgirl, Jain sources musical inspiration from the scores of Bollywood classics and Spaghetti Westerns, Indian folk traditions, jazz improvisation, and rollicking psychedelic and surf guitar styles. Sunny Jain’s Wild Wild East is rooted in the contemporary global soundscape, singing in a new voice, “I am large, I contain multitudes.”

Composer/drummer Sunny Jain is most known for founding the band Red Baraat, a frenzied fusion of bhangra, hip-hop, jazz, rock, and sheer, unbridled energy that NPR has called “the best party band in years.” 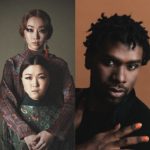 SaaWee is a contemporary shaman ritual created for the spirituality of current society. SaaWee accentuates the electricity between the old and new through multi disciplinary languages invoked by Korean shaman rhythm. Sita Chay (Latin Grammy winning violinist based in New York), Jihye Kim (provocative percussionist of Urban Sound based in London), often collaborating with a unique visual collaborator, re-imagines ancient stories in order to touch upon current societal illness and seeks for cure through energy links between participants.  Their ritual is often in 5 different stages and it starts by entering into an artistic spirituality through counter clockwise circular motion.  What makes SaaWee relevant to a wide range of audiences is their musical fluidity to summon eclectic colors of various cultural rhythms and melodies. Also not to be underestimated is their emphasis on embodiment of sound through movements and theatrical aspects.

Since their successful world premiere in London 2018, SaaWee soon after gained interest from respectful music scenes and were invited to Edinburgh Festival Fringe, Boston Same River Twice Festival, Splendor of Amsterdam, Koreanisches Kulturzentrum of Berlin, Hartford University, Colombia National University and Changdong Platform, most of which were sold out and ended with standing ovations.

J. Hoard is a Brooklyn-based artist. In one performance, you are given the core of the Black church and the allure of “The Great White Way” (Broadway). His original compositions and arrangements easily shift genres to articulate his vivid songwriting. This eclecticism has yielded collaborations with artists such as Black Coffee, Chance the Rapper, Brasstracks, and hip-hop royalty Jean Grae & Quelle Chris. Additionally, he has worked closely with a host of jazz/experimental artists such as Sonnymoon, Javier Santiago, Jose James TheLessonGK, and music legend Meshell Ndegeocello. 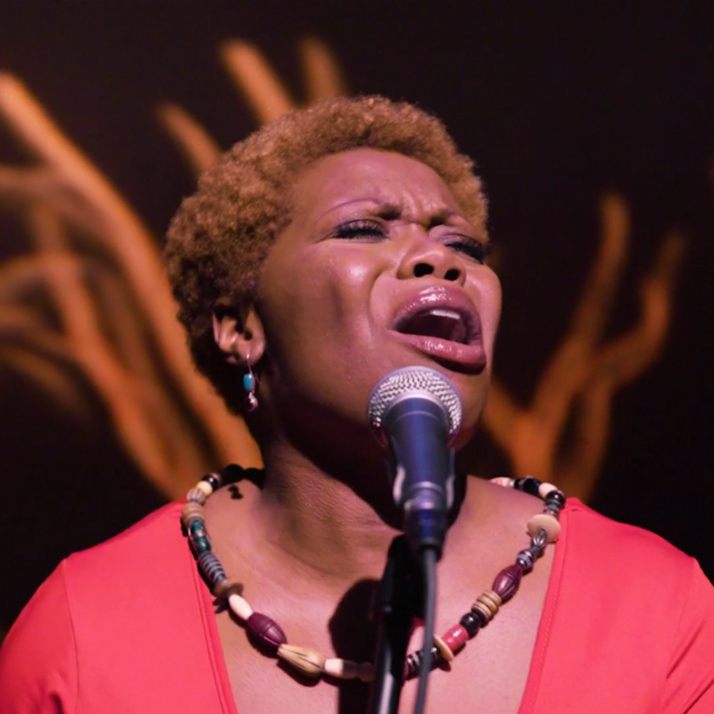 A Carolina country girl, Zonya grew up singing in a hand clapping, foot stomping church. Zonya performed at what is now called Broadway at Sacramento earning her Equity card. Shortly after moving to New York, Zonya landed the role of Celie in The Color Purple on Broadway (produced by Oprah Winfrey), replacing Fantasia Barrino. Other credits include Avenue Q, Dreamgirls, Sister Act, Lights Out Nat King Cole, Intimate Apparel, and Little Shop of Horrors. As a member of Broadway Inspirational Voices, Zonya has recorded with Jennifer Nettles, Leslie Odom, Billie Porter, The Yeah Yeah Yeahs, and has performed in Mariah Carey’s 2014 Christmas Spectacular.

Volunteering for several organizations including The Ronald McDonald House, Broadway Cares/Equity Fights AIDS, Covenant House, and Sing For Hope continue to be the best moments of her career. Thank God for unconditional, unfailing, everlasting love and favor. Romans 8.

Spiritual Uprising is a concert conceived by Zonya during the global pandemic. Inspired by “my ancestors and my descendants,” Zonya hopes to remind us to look to the past in order to create a better future!
@lovezonya | Instagram | Twitter 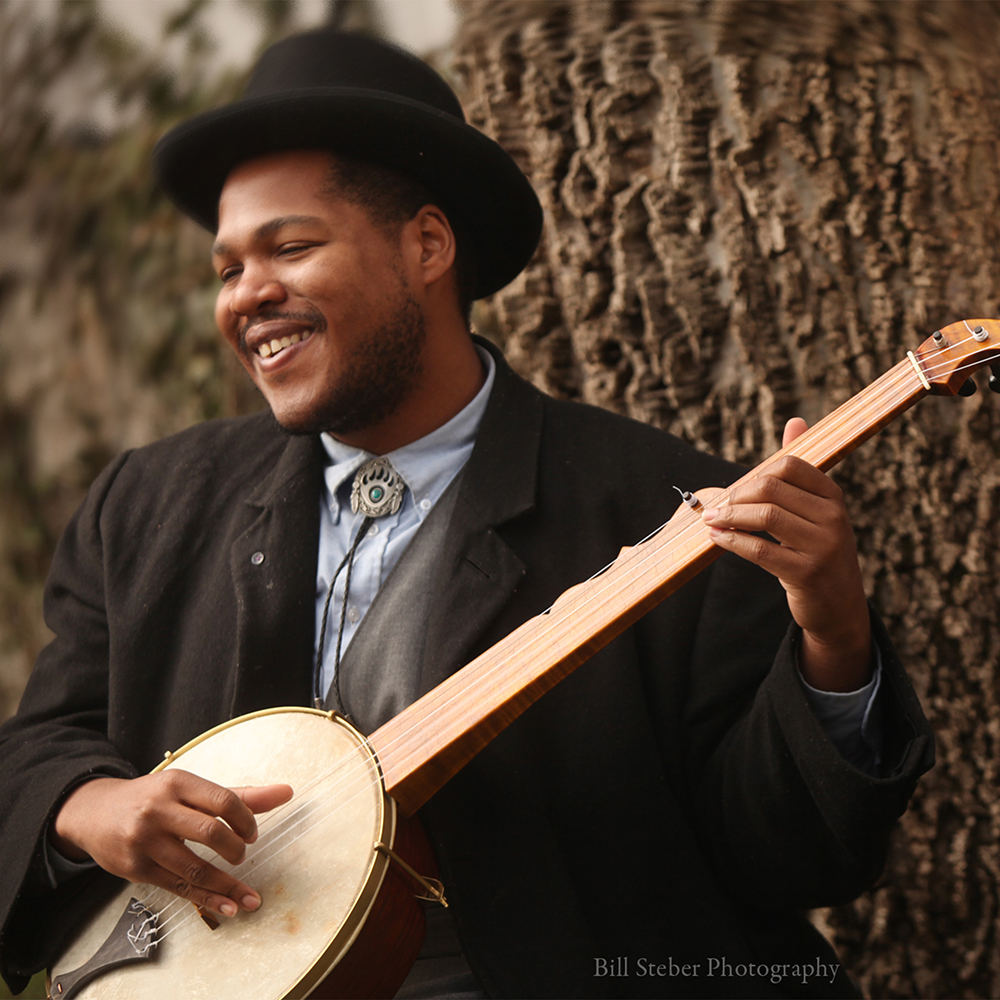 Jerron Paxton is a musician who specializes in Black Folk music in both urban and rural form. He tours the world most of the year as one of the few soloists of African American roots music. Originally from the western end of the “Chitlin Circuit” in South Central Los Angeles he has made his home in New York since 2010 and has found a home there amongst the great practitioners of both traditional and contemporary musicians in . Banjo, fiddle, guitar, piano, harmonica, singing and storytelling has led him to a globe-trotting career of sharing his music and culture with his audience the world over.
@jerronblindboypaxton | Facebook 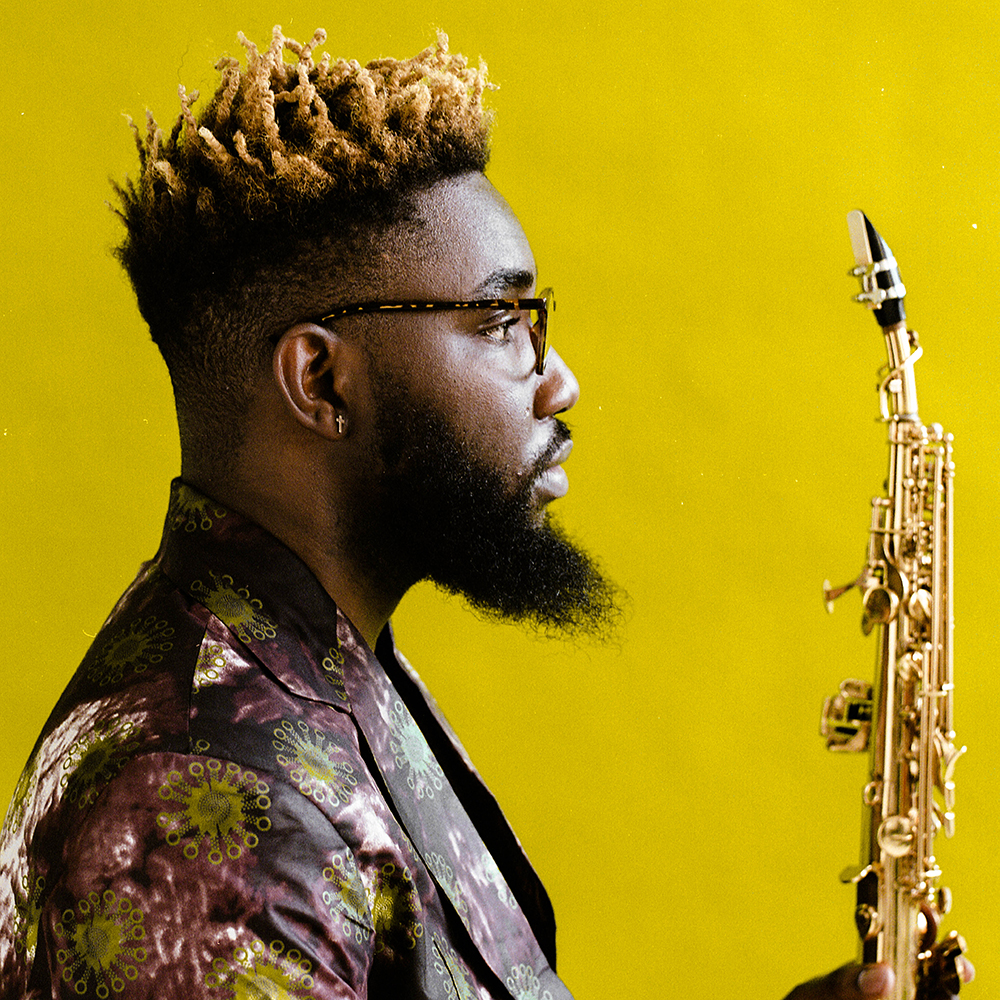 Eli Fola is a Nigerian born, New York and Tulum based multi disciplinary sound artist, saxophonist, DJ, and producer. He is the creator and pioneer of the live-hybrid set “Yoruba Tech Soul”— a fusion of AfroHouse, Techno, Jazz, and Classical music. He is often regarded as a saxophone genius and branded with the visual art world due to his powerful imagery that showcases Afrohouse and spirituality in a modern context.

He has performed alongside artists such as Black Coffee, Pablo Fierro, and Audiofly. He has also been sought after by Grammy-winning producer Swizz Beatz and Alicia Keys for private events at their home as well as their No Commission event in Miami where he got to perform alongside artists such as A$AP ROCKY, Lil Wayne and 2 Chainz. Eli Fola was also a 2017 Ted Speaker and performer. His Ted talk focused on how music can be used to reconcile and highlight differences in culture and identity. 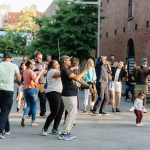 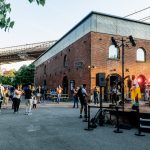