Featuring the photographs of six international and acclaimed artists and photojournalists currently working on the frontlines of the world’s migrant crisis, from the original Calais Jungle to Serbia to the US Southern Borders: Miguel Amortegui, Sarah Hickson, Omar Imam, John Moore, Abdul Saboor and Griselda San Martin, plus artwork from the Good Chance Dome and The Nation.

The number of displaced persons in the world has reached its highest level in modern history, driven by endless cycles of conflict, crushing poverty, and indiscriminate violence. These visual stories are a hard look at the complexities of immigration and migration, capturing the experiences of people worldwide embarking on perilous journeys to find safety in new homes or temporary stops along the way.

For a decade, John Moore has been documenting immigration along the US-Mexico border, while Griselda San Martin has focused on families torn apart by the border fence where relatives travel long and far to lay eyes on their loved ones for a few precious moments. Miguel Amortegui and Sarah Hickson explore life, hope, and creation amidst the squalor and danger of the Jungle. The migrant encampment near Calais, France was notorious both for its human rights abuses by the French police as well as the thriving, if temporary, community created by the 6,400 migrants that once called it “home”.

Abdul Saboor and Omar Imam are refugees themselves, having been forced to leave their homelands. Here they share stories of their countrymen in exile, through the reenactment of their innermost dreams and fears, as in the case of Omar’s surrealist portraits. Abdul documents the small moments in the days without end of Afghan refugees trapped in Serbia as they live, wait, and dream of reaching the European Union just beyond the border.

Each photograph in this exhibition translates headlines and faceless statistics into living, breathing people with dreams and aspirations no different than those we have for ourselves and for our children. 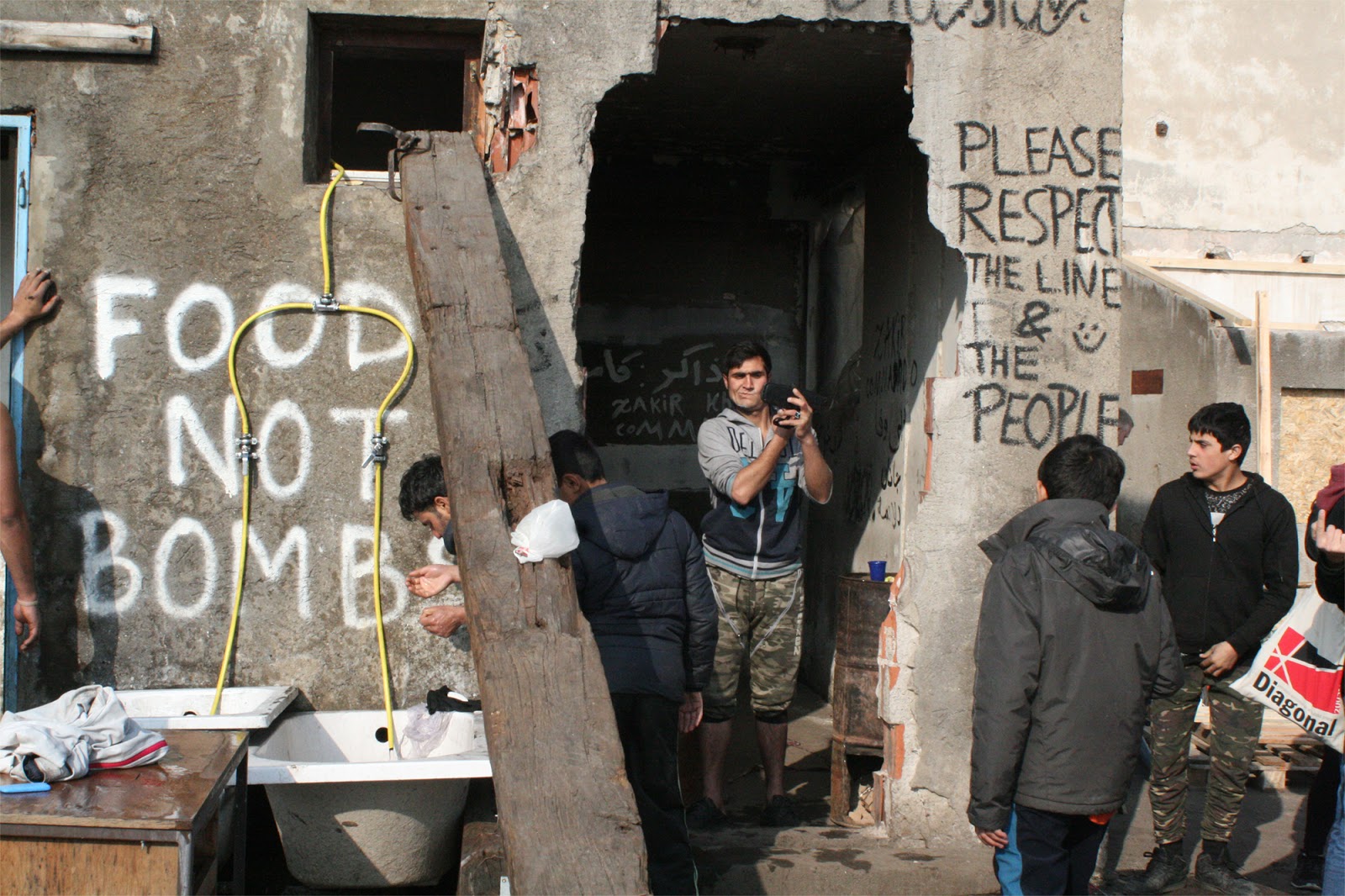 BELGRADE: ON MY JOURNEY TO EUROPE

Abdul is a refugee from Afghanistan living in Paris, France. He arrived in Paris in October 2017. He has documented the Balkan Route from Afghanistan to the EU and continues to document the lives of asylum seekers in Paris. “The Barracks” in Belgrade, Serbia hosted roughly 1200 refugees who were stuck in Serbia, on the borders of the EU. They lived through -15 degrees in the winter months without showers, toilets or clean water to drink. The squat was filled with toxic smoke as they burned ‘sleepers’ and railway ties to cook and stay warm.

Abdul met Good Chance Theatre in Paris in January 2018 where he became a key member of the theatre, and photographed many of Good Chance’s performances with local artists and refugees from across the world.

As a special correspondent for Getty Images, John Moore has spent much of the last decade photographing issues of undocumented immigration to the United States from Central America and Mexico. He’s taken a broad approach, focusing on asylum seekers fleeing violence, migrants searching for economic opportunity, and the U.S. federal government’s response to pursue, detain, and deport them. Throughout, Moore has tried to humanize this story.

He’s driven, flown over and floated down the entire length of the U.S.-Mexico border, which winds along the Rio Grande in Texas, rises up and over mountains, crosses deserts, and stretches into the Pacific Ocean.

Getty Images and powerHouse Books published Undocumented: Immigration and Militarization of the United States-Mexico Border in March 2018, at the project’s ten-year mark. In June, Moore documented immigrant crossings under the Trump administration’s “zero tolerance” policy. The pictures he made on that trip of a young girl crying were widely published and their use hotly debated.  The U.S. government continues to remake immigration policy, thousands of Central Americans still choose to take the arduous journey north and millions of undocumented families in America live in fear. Their story is far from over.

John Moore is a senior staff photographer and special correspondent for Getty Images. He has photographed in 65 countries on six continents and was posted internationally for 17 years, first to Nicaragua, then India, South Africa, Mexico, Egypt and Pakistan. He returned to the U.S. in 2008 and has since focused on immigration and border issues. Moore has won top awards throughout his career, including the 2005 Pulitzer Prize for Breaking News Photography, World Press Photo honors, the John Faber Award and the Robert Capa Gold Medal from the Overseas Press Club, Photographer of the Year from Pictures of the Year International, the NPPA and Sony World Photography Organization. Moore is a graduate of the University of Texas at Austin, where he studied Radio-Television-Film. He lives with his family in Stamford, Connecticut. 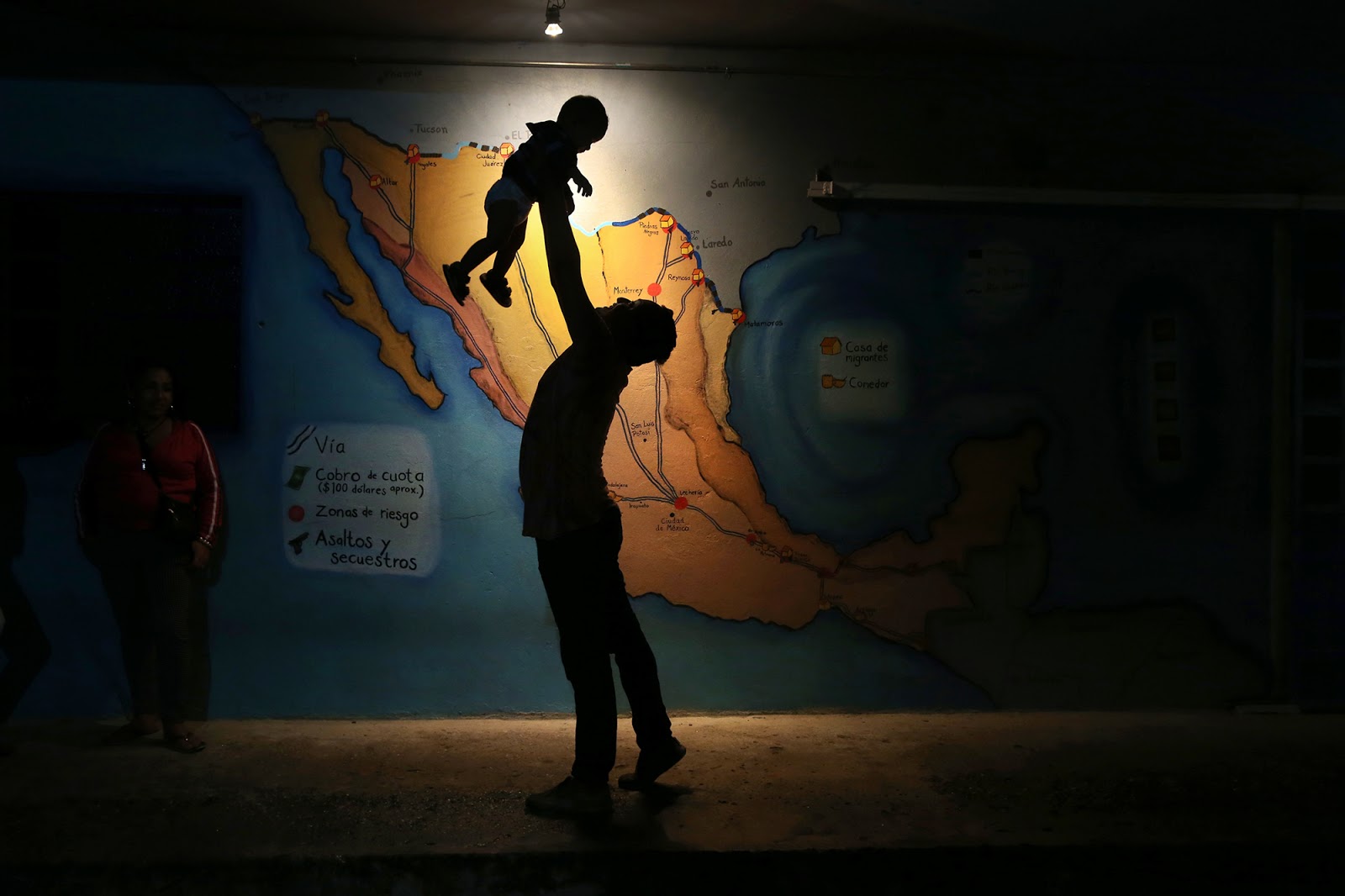 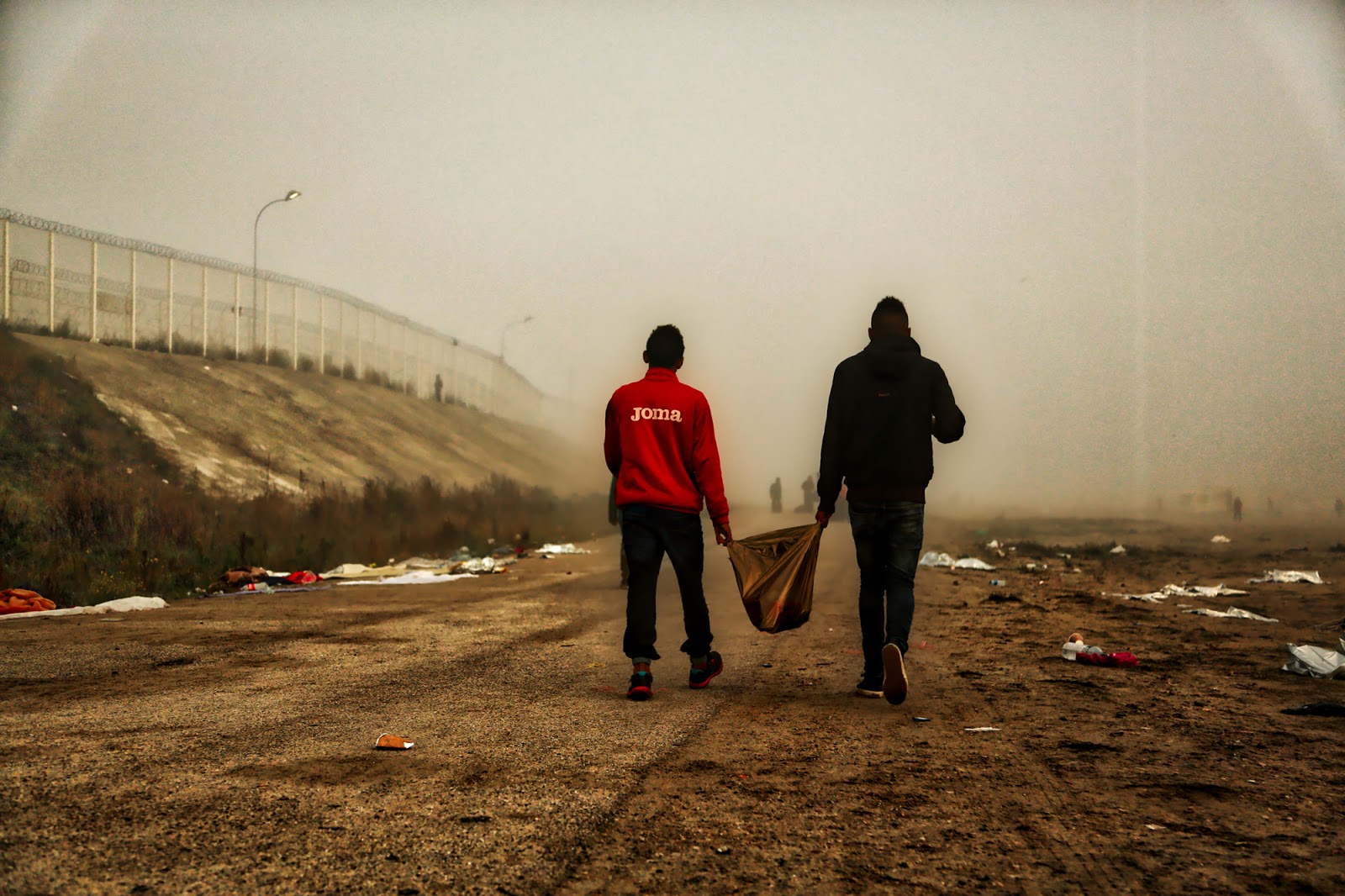 VOICES OF THE JUNGLE

Voices of the Jungle  was born as a response to the oversaturated and irresponsible coverage with which the mainstream media decided to report the refugee humanitarian crisis in general. It gives a specific voice to the thousands of refugees that were trapped and mistreated in the infamous Jungle in Calais, France.

Voices of the Jungle  is the result of a long time working in the refugee camp and getting to know its people. It is an intimate portrait of the life of these refugees, their stories, their hopes, their dreams and especially their dignity.

Miguel is an award-winning film-maker, photographer, investigative journalist and participatory photography trainer. He has worked for a range of clients in the UK and internationally, shooting assignments for commercial organisations, not-for-profit groups and social enterprises. His clients have included the BBC, Bank Santander, PhotoVoice, Calista Advertisement, FSI Law, Botswana High Commission, Frontier Economics, and others, while his work has been exhibited in many countries in Europe, Africa, and South America. But when he reflects on his 15-year career, it is the relationships he has formed with both clients and subjects that he recalls most vividly — the bonds formed over shared cigarettes and cold cups of coffee that are the inevitable backdrop to a story unfolding.

Live, Love, Refugee is Omar Imam’s photographic response to the chaos erupting in his homeland. In refugee camps across Lebanon, Imam collaborated with Syrians to create photographs that talked about their reality, rather than presenting them as a simple statistic. As a refugee himself, Imam understands the loss and chaos of being displaced from one’s home. But dreams cannot be eradicated—dreams of escape, dreams of love, and dreams of terror. These dreams are what Imam set out to capture. The resulting images peel back the facade of flight, to reveal the spirit of those who persevere, despite losing everything that was familiar. These composed photographs challenge our perception of victimization, offering access into the heart and soul of humanity.

Omar Imam is an Amsterdam-based, Syrian photographer and Rijksakademie artist. In his photographic works, Imam uses irony and a conceptual approach to respond to the violent situation in Syria; his photographs vacillate between mundane documents and utterly inconceivable dreams.

In “Live, Love, Refugee” Omar dissolves the recurrent representation of Syrian refugees by replacing numbers, reports, and statistics with hallucinations, fears, and dreams. He asks them to recreate their dreams: dreams of escape, dreams of emasculation, and dreams of love and terror. Sparse and surrealistic, the resulting images evoke the deepest and darkest inner worlds of those persisting everyday with their roots stretching further from a home left behind. 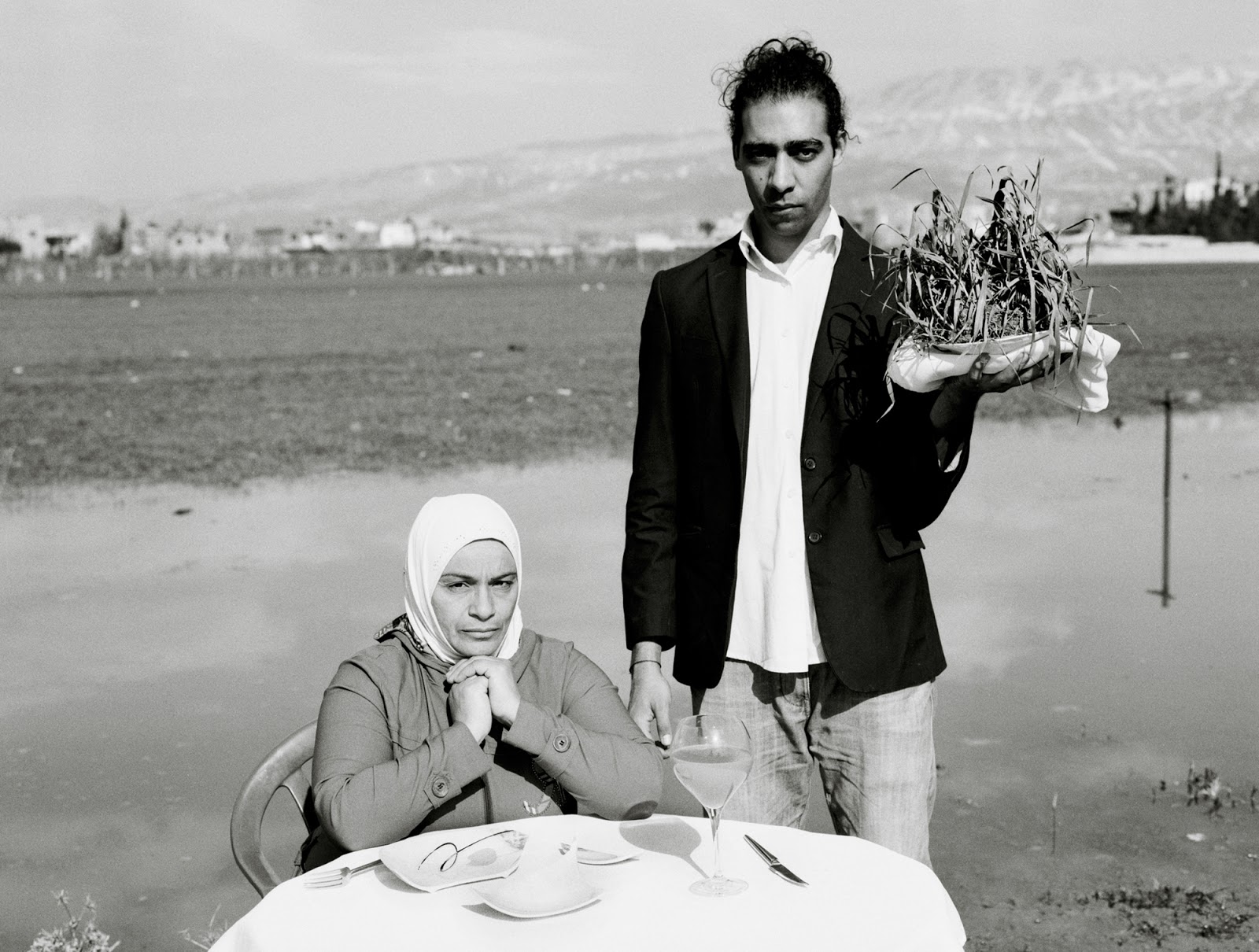 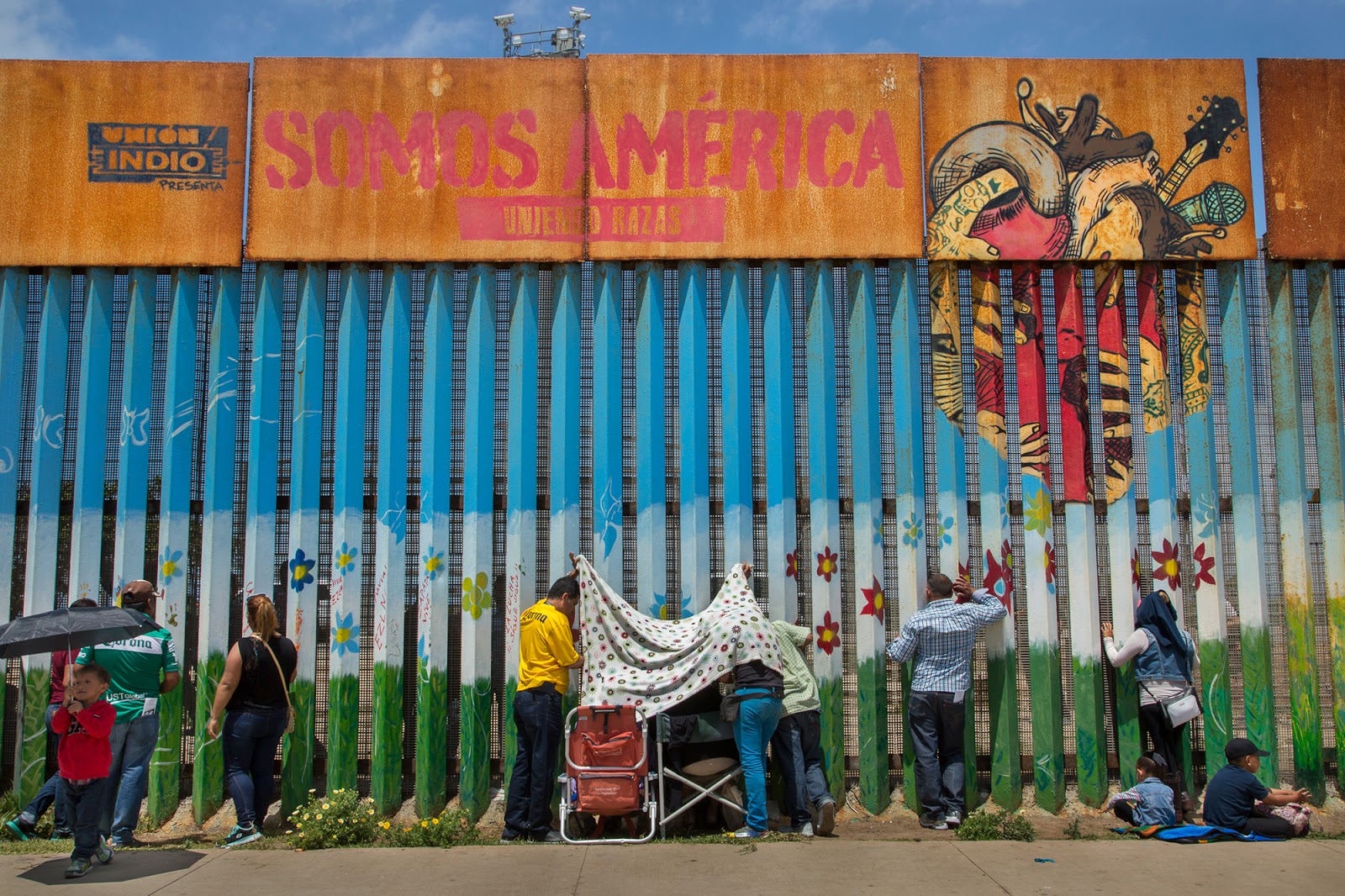 At the juncture of San Diego, California; and Tijuana, Mexico, the border wall’s rusting steel bars plunge into the sand, extending 300 feet into the Pacific Ocean, and casting a long and conflicting shadow.

The Wall is a documentary project about Friendship Park, a stretch of the U.S.-Mexico border where families meet to share intimate moments through the metal fence that separates them. Physical borders create symbolic boundaries that reinforce the rhetoric of “us versus them,” in which immigrants are seen as a threat to traditional narratives ingrained in various communities across America.

Griselda San Martin’s goal is to transform the discourse of border security into a conversation about immigrant visibility, addressing audiences on both sides of the wall by challenging popular assumptions, or by reminding them that they are seen, heard and that they matter. This work is especially meaningful now, given the current socio-political global context.

Griselda San Martin is a Spanish documentary photographer currently based in New York City. Throughout the past six years, San Martin has documented the U.S.-Mexico border, focusing on the issues of immigration, deportation, inequality and human rights abuses through an optic of identity and belonging.

Her current focus is on the growing Hispanic community in the United States and the sociopolitical implications of reactionary narratives depicting immigrants and ethnic minorities. Her work explores the transnational life and practices that link individuals, families and social networks across political boundaries.

SOUNDS UNSEEN : A PHOTOGRAPHIC MEMOIR OF THE CALAIS SESSIONS

Sarah Hickson made her first trip with The Calais Sessions on a bleak, cold and wet weekend just before Christmas 2015. An eclectic group of musicians and sound engineers travelled from the UK to the Jungle refugee camp with instruments, portable sound gear and a generator. A tarpaulin-covered wooden classroom became a recording studio and open stage for musicians living in the camp (from Syria, Afghanistan, Kuwait, Iraq, Iran, Pakistan, Ethiopia, Sudan, Eritrea and elsewhere) to join with other players from the UK. The Calais Sessions not only provided some respite from the harsh reality of daily life in a refugee camp, it was the vessel that contained beautiful and moving stories, generated joyous exchanges and moments of reflection that live on through the music on the album and these photographs.

Sarah Hickson is a London-based photographer whose practice focuses on artists and performance and the role of the arts from a wider social or humanitarian perspective. Her recent work is concerned with displacement and migration, the expressive qualities of the physical body, and the power of the arts to cross boundaries and create community. She has worked on photographic commissions, documentary assignments, residencies and personal projects in West and North Africa (Mali, Senegal, Burkina Faso, the Sahara Desert and Morocco), India, Europe and around the UK, collaborating with NGOs as well as theater companies, choreographers, musicians and festivals. She has had solo exhibitions in New York, London, Paris, Galway and Bamako and her work has been published widely in the international press. 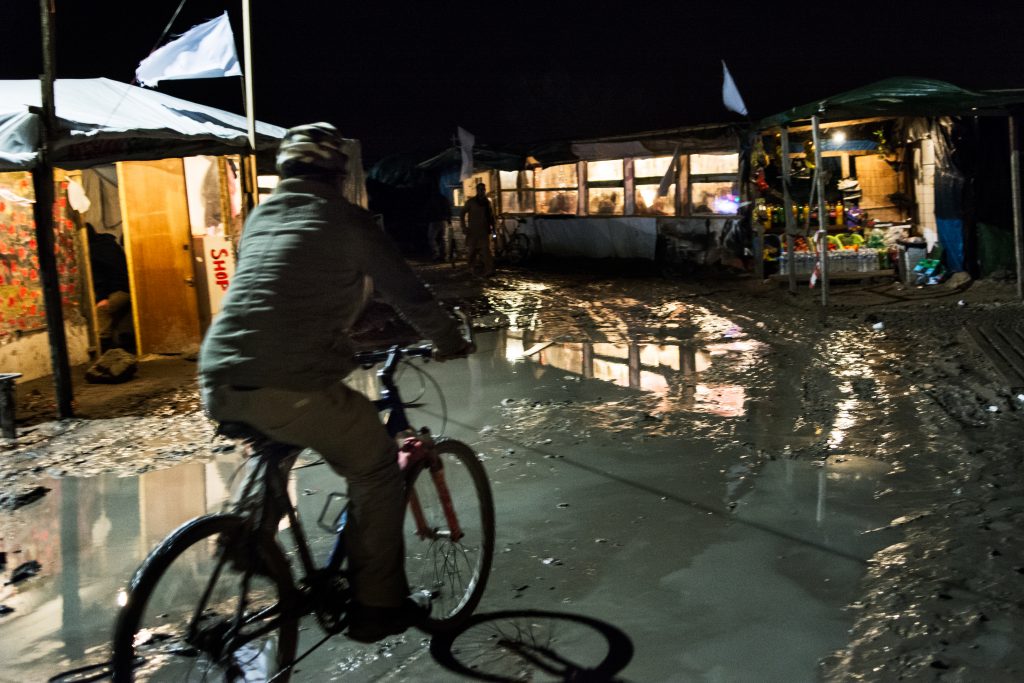