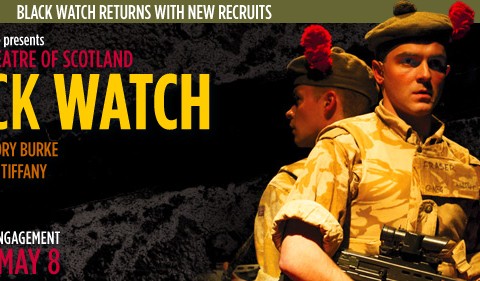 Since its very first performances in 2006, the National Theatre of Scotland’s Black Watch has enjoyed extraordinary critical acclaim and sold-out performances everywhere it has appeared. When St. Ann’s Warehouse presented the New York premiere in 2007, Ben Brantley of The New York Times called Black Watch “one of the most richly human works of art to have emerged from this long-lived [Iraq] war” and “an essential testament to the abiding relevance—and necessity—of theater.”

Written by Gregory Burke and directed by John Tiffany, Black Watch is a Scottish Army regiment’s eye-view of the war in Iraq. The play is based on interviews Burke conducted with soldiers who served, and hurtles from a pool hall in Fife to an armored wagon near Fallujah. Black Watch was the first piece of theater about the war to tell the story from the point of view of the soldiers, which it does via docudrama, video sequences, song, dance, panoramic historical sequences, an extraordinary sound score and in-the-moment acting. The ensemble cast members move in synchronicity with drill-time precision. Each and every one of them is a distinctive blend of fears, ambitions and confusion.

It is important to remember the soldiers just as our troops are returning home in July, and Black Watchpaints their emotional landscape with deep empathy. The youthfulness of the new recruits, like the real soldiers the actors are portraying, lends a heart breaking, fresh realism to the show, which, five years after its premiere in Edinburgh, has become a modern classic.

Back to 2010-2011
But if Black Watch felt searingly topical when it first came to St. Ann’s, it now seems timeless, as fully realized, self-contained works of art must be.
—Ben Brantley, The New York Times
…more likely than ever to break your heart.
—Ben Brantley, The New York Times
Learn more about Black Watch
WATCH THE BLACK WATCH TRAILER WITH THE NEW RECRUITS
MAKING THE MUSIC OF BLACK WATCH
LEARN HOW THE CAST TRAINED FOR THE SHOW
THE CREATORS DISCUSS THE RETURN OF BLACKWATCH