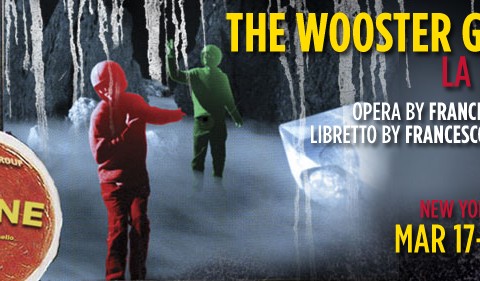 The Wooster Group returns to St. Ann’s Warehouse with Cavalli / Busenello’s baroque opera La Didone (1641), in which Aeneas, prince of Troy, lands on the shores of Africa after a violent sea storm. There he falls in love with Dido, queen of Carthage, and becomes entangled in a web of love, deception, power and madness. In Mario Bava’s 1965 cult movie Terrore nello spazio, the spaceship Argos crashes on the planet Aura, and its crew becomes locked in a desperate battle with zombies over the all-important “meteor rejector.”

Back to 2008-2009
Completely fearless.
—The Guardian
Coming from a company with such a radical reputation, this is an unexpectedly non-abrasive show with a subtle melancholic undertow. But it’s also ­good fun. In their nifty silver spacesuits the cast of actors and singers handle the inter-genre confusions adeptly, especially Hai-Ting Chinn’s beautifully sung Dido.
—The Times of London
Fans of theatre in all its forms will experience a mind-blowing vision inspired by the moment when opera itself was the most strange and experimental of cutting-edge art-forms, filtered through the wit, intelligence, and sheer cross-cultural genius of one of the great experimental companies of our time.
—The Scotsman
Learn more about La Didone
Ben Brantley Calls La Didone "Wondrous"
Slideshow: Vampires And Arias