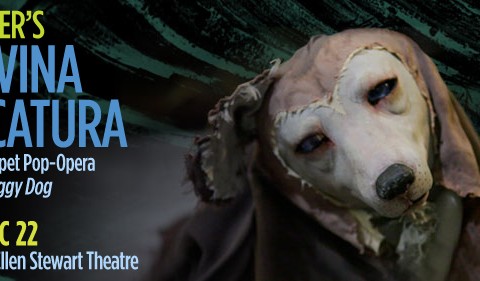 The musical score is by Lincoln Schleifer, with pop songs and original compositions incorporating the work of Breuer collaborators Bob Telson and John Margolis. The music will be performed by a live band, a quartet of male soul singers, “The Poppers” (Ben Odom, Gene Stewart, Lee Williams and Roy Bennett); a trio of female backup singers, “The Wild Women” (Maxine Brown, Beverly Crosby and Sherryl Marshall); and members of the cast.

La Divina Caricatura is supported in part by the National Endowment for the Arts American Masters and The Jim Henson Foundation.

Back to 2013-2014
Lee Breuer is ‘a wizard-director, an alchemist who blends ideas, genres, styles, texts and technologies to make new kinds of theater.’
—The New York Times
A comic spectacle… an acid-trip collage of philosophy, mythology, and lyric poetry.
—The New York Times (about "Part 2")
OUTSTANDING ACHIEVEMENT
—OBIE AWARD
Learn more about La Divina Caricatura
WATCH interviews with Lee Beuer's team
DISCOVER backstage content on Tumblr
FOLLOW @LaDivinaPlay on Twitter
LISTEN and preview the music in the trailer