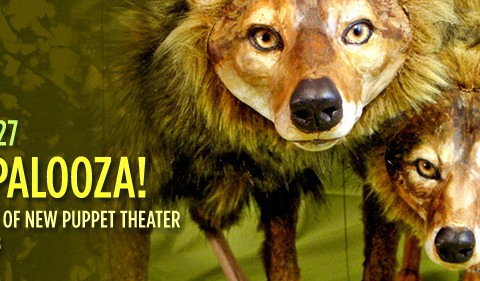 Funded by the Jim Henson Foundation and the National Endowment for the Arts. Photo by Deborah Simon

Before & Still
By Alan Calpe

Before & Still animates objects in a still life composition to suggest an unexpected history (or more, a process of becoming) out of the singular still life moment.

In 1846 French watchmaker Jean Eugene Robert-Houdin and American watchmaker Phineas Quimby gave birth to the modern age – one, as the grandfather of special effects, the other, as the founder of a host of mind-over-matter religions. In a series of vignettes that spans 20 years, the two men engage in a kind of lifelong sorcerer’s battle, against a backdrop of a cogs and springs. In this except from the full-length play, both men try their hand at the miracles they know best as an illness brings them together.

The Collector of Lies

Two characters, who live next door to each other, share a linked past that seems to reside between their walls.  The girl’s collection of lies hints at a strange version of the Pinocchio story that ultimately questions our truths and our identity.

by Matt Reeck and Deborah Simon
video by Dan Wonderly

Puppet Junction presents excerpts from The Dalí‘ Project. Travel into the inner workings of Dalí’s subconscious by crossing the surrealist portal into his dream world. Join us as we rifle through his drawers and expose the many layers of his inspiration.

Regarding Shadows on the Grass

In the wake of the 1994 genocide in Rwanda, when over 800,000 were killed in the span of three months, the small, densely populated country must now rebuild the ruins of its economic, political and social structures. Faced with overcrowded prisons and a legacy in which the majority Hutu population was incited to massacre Tutsi neighbors, the Rwandan government has instituted a program of transitional justice and reconciliation called “gacaca”–a term referring traditionally to a grassy area where communal problems were resolved. “Regarding Shadows on the Grass” engages puppet theater to convey a visitor’s impressions of post-genocide Rwanda during the current program of national unity. The show explores the role of testimony as an anchor to truth, and the conflict between the pressure to “reconcile” or forgive and the moral demand to pursue justice.

The Wayfaring Zombie is a “classic” zombie story told with hand-carved wooden marionettes. Inspired by the art from graphic novels and an old Appalachian spiritual folk song “Wayfaring Stranger”. Unlike other zombies, our zombie does not just “eat brains”. We follow him on his journey, a quest for eternal rest, as he comes to the rescue of a young girl held prisoner by an evil mad-scientist. Zombies can never rest…