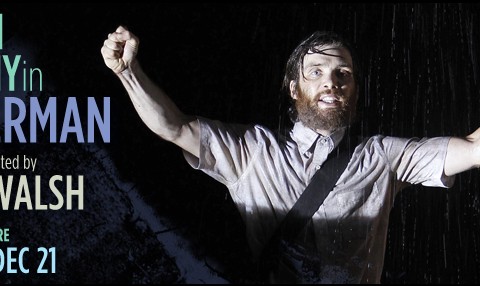 Written and Directed by ENDA WALSH

Thomas is on a journey. Where did it begin? What voices does he hear? And what will they tell him to do?

Misterman reunites two of Ireland’s brightest stars — actor Cillian Murphy and writer/director Enda Walsh — for the first time since their collaboration on Disco Pigs fifteen years ago. Cillian Murphy (Inception, Batman Begins, Breakfast on Pluto, The Wind that Shakes the Barley) makes a spectacular return to the New York stage with a dark, dangerous and blisteringly funny tale about one young man on his judgment day. With the help of a world-class creative team, original music, and St. Ann’s cavernous warehouse, Walsh and Murphy conjure an electrifying vision of an entire town, heaven and hell, in a tour de force solo performance of epic proportions.

“It seems inadequate to describe Murphy’s performance as seamless, but this is what he manages…laying bare Thomas Magill’s sad soul as ragingly as if he took a scalpel to his heart.” – The Sunday Independent

Running time is approximately 90 minutes and there is no intermission.

Back to 2011-2012
Murphy is riveting … a bravura celebration of [Walsh’s] theatrical vision
—The Guardian
Theatre at its most raw, most barbaric and most beautiful.
—The Irish Independent
Misterman is a marvelous achievement.
—The Sunday Independent
Learn more about Misterman
Read the NY Times review