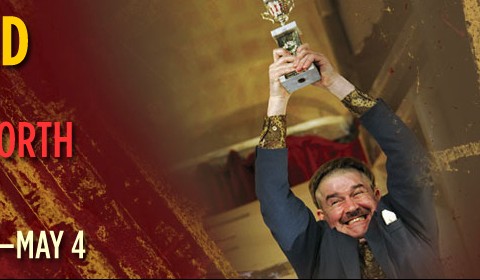 Come see the company who gave us Martin McDonagh’s Tony Award-winning The Beauty Queen of Leenane, 4-time Tony-nominated Lonesome West, and DruidSynge, hit of the 2006 Lincoln Center Festival, with their American Premiere of the play The New York Times calls “ferociously entertaining” and Variety hails, “a triumph of suspense and staging, enacted unforgettably…”

Disguised as an old-fashioned high farce, complete with
rapid costume changes, cross-dressing, and mistaken identity, The Walworth Farce careens from hilarious moments to shocking realism, a contrast in frenetic, madcap slapstick and the deeper, darker concerns that are revealed when an outsider enters the realm

Back to 2007-2008
A theatrical experience that claws at the imagination for days afterwards
—Variety
London-based Irishman Enda Walsh has outdone himself with a complex, dark, and emotionally rich master stroke of meta-theatricality
—Variety
Learn more about The Walworth Farce
NY Times Arts & Leisure Feature Article On The Walworth Farce