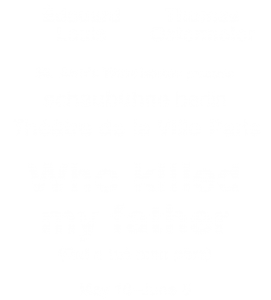 Based on the book: QUI A TUÉ MON PÈRE. Copyright © Édouard Louis. All rights reserved.

Running time is approximately 90 minutes with no intermission.

ÉDOUARD LOUIS (Writer & Performer) Édouard Louis was born in 1991 in Hallencourt as Eddy Bellegueule and studied sociology with Didier Éribon at the École Normale Supérieure in Paris. His autobiographical début novel, En finir avec Eddy Bellegueule (The End of Eddy, 2014), became a #1 bestseller in France and has been translated into 18 languages. In the book, he writes about growing up as a homosexual youth in the working class milieu of the French provinces. His second, also-autobiographical, novel, Histoire de la violence (History of Violence), was published in 2017, followed by Qui a tué mon père (Who Killed My Father, 2018). Among many other accolades, Louis has received the Pierre Guénin Prize for his commitment against homophobia. He lives in Paris.

THOMAS OSTERMEIER (Director) Thomas Ostermeier was born in Soltau in 1968 and grew up in Landshut. He studied directing at the Ernst Busch Academy of Dramatic Art in Berlin from 1992 to 1996. From 1996 to 1999, he served as the director and artistic director of the Baracke at the Deutsches Theater Berlin. He has led the Schaubühne since 1999. Ostermeier has helmed productions at the Münchner Kammerspiele, Burgtheater Wien, Théâtre Vidy-Lausanne and Comédie-Française, among others. He curated the Festival d’Avignon as Artiste associé in 2004. In 2010, he was named Officier de l’Ordre des Arts et des Lettres, and in 2015, he was appointed Commandeur de l’Ordre des Arts et des Lettres. From 2010 to 2018, he served as president of the Franco-German Cultural Council, and in 2011, he received the Golden Lion of the Venice Biennale for lifetime achievement. He has received honorary doctorates from the University of Kent (2016) and the University of Gothenburg (2019). He is a member of the Akademie der Künste, Berlin. Ostermeier was awarded the Prix Molière for the best Production for Shakespeare’s Twelfth Night at the Comédie-Française in 2019. His most recent productions at the Schaubühne are: Returning to Reims, based on the book by Didier Eribon (2017/2021); History of Violence, by Édouard Louis (2018); Italian Night, by Ödön von Horváth (2018); abgrund, by Maja Zade (2019); Twelfth Night, by William Shakespeare (2019); Youth without God, by Ödön von Horváth (2019); Who Killed My Father (Qui a tué mon père), by Édouard Louis (2020); Vernon Subutex 1, by Virginie Despentes (2021); and ödipus, by Maja Zade (2021).

SÉBASTIEN DUPOUEY (Video Designer) Born in 1969 in Paris. Studied at the École Nationale Supérieure des Arts Décoratifs in Paris. He works as a musician and graphic designer for the French music scene. He directs for music video productions and French television. Since 2005 he has been creating video sequences for theatre, as well as developing video installations and film projects. He has collaborated with Falk Richter, Stefan Pucher, Lars-Ole Walburg and Christina Paulhofer, among others. He has worked under Thomas Ostermeier at the Münchner Kammerspielen, on productions including Vor Sonnenaufgang by Gerhart Hauptmann (2005) and Susn by Herbert Achternbusch (2009), and at the Stadsschouwburg Amsterdam on Ghosts by Henrik Ibsen (2011). Sébastien Dupouey lives and works in Paris and Berlin.

MARIE SANCHEZ (Video Designer) Born in Paris. Studied philosophy and film in Paris. At the Schaubühne camera and editing for Returning to Reims after Didier Eribon (2017), video documentation for Italian Night by Ödön von Horváth (2018) and video assistance for History of Violence after Édouard Louis (2018) and for Abyss by Maja Zade (2019). 2019/20 video design for Who killed my father (Qui a tué mon père) by Édouard Louis as scholarship holder of the Académie de Berlin. Cinematic works: assistant director for The Audition (director: Ina Weisse, 2019) and for Gli ultimi a vederli vivere (director: Sara Summa, 2018). Own works among others: Das Fremde in Venedig (2016), Mich (akk.) (2016), Les Poings (2017), Les Désespérés (2017), Gemischte Gefühle (2017), Das Porträtieren (2017), Les Yeux Clos (2019) in collaboration with the choreographer Evelin Facchini as well as the art project Stalag III B in collaboration with Evelin Facchini, Hayaka Komatsu and David Stöhr.

CAROLINE TAVERNIER (Costume Designer) Caroline Tavernier has been a costume designer since 1994. Originally a dressmaker for film, she soon worked as a costume designer with directors such as Claire Denis, the Larrieux brothers, Nicolas Klotz and Lodge Kerrigan. Most recently, she designed the costumes for Ludovic Bergery’s film L’étreinte with Emmanuelle Béart which premiered in May 2021. In theatre, she has been working closely with Julien Gosselin since 2013, currently for his production Le Passé by Leonid Adreiev at the Théâtre de l’Odéon (premiere on 30 November 2021). Collaboration also with director Tiphaine Raffier, most recently for La réponse des Hommes which will have its premiere at Théâtre la Criée 1. in Marseille on 17 December 21.

SYLVAIN JACQUES (Composer) Born in Paris in 1971. Composer, musician and actor. Compositions for Christina Paulhofer’s theatre productions for more than 20 years, including Täter (1999), Macbeth (2002) and Cyrano de Bergerac (2006). As a composer, he has also worked with directors Thierry de Peretti, Michel Foucher, Michael Serre and Renate Jett, among others. As an actor, he performed in Luc Bondy’s production of Racine’s Phaedra at the Théâtre de l’Odéon and appeared in the film Son frère by Patrice Chéreau. In 2003, foundation of the music duo The Ensemble with Nicolas Baby from the Fédération francaise de funk (FFF). In 2004, release of their first album The Ensemble. In 2006, release of his first solo album. Responsible for sound, music and co-directing in film productions such as Walking 2 Hawaii (2003), Récamier (2006), Shadow Words (2008) and Kowalski (2011). Release of the album Radiation Transparente. in 2016.

FLORIAN BORCHMEYER (Dramaturg) Born in 1974 in Wasserburg am Inn. Since the 2011/12 season he is dramaturg, 2013–2019 he was head of dramaturgy at the Schaubühne Berlin. Studied literature in Berlin, Havanna and Paris. In 2006 conferral of a doctorate in philosophy with the graduate thesis about the history of the discovery of America. In 2006 he was awarded the Bayerische Filmpreis for the documentary movie Habana – Arte nuevo de hacer ruinas. He is a filmmaker and works as a literature critic and curates the international programme at Filmfest Munich.

ELISA LEROY (Dramaturg/Assistant Director) Elisa Leroy, born 1989 in Paris, is a dramaturg at Schaubühne am Lehniner Platz and Shakespeare scholar working in Berlin, Munich and Paris. She received her PhD from the Ludwig-Maximilians-Universität in Munich for her dissertation More than is set down: Hamlet as text and performance. After studying Comparative Literature in Munich and Berkeley, she worked as an assistant director in Thomas Ostermeier’s french-speaking productions and as assistant to the Artistic Director at Schaubühne am Lehniner Platz, Berlin (2014–2016). Most recently, Elisa Leroy collaborated as dramaturg on Thomas Ostermeier’s production of La nuit des rois ou Tout ce que vous voulez by William Shakespeare at the Comédie-Francaise in Paris (2018) and as production manager on the scenic installation Qui a tué mon père by and with Édouard Louis (FIND Festival, Schaubühne am Lehniner Platz, 2021). Her research interests include Early Modern theater, more specifically the theater of William Shakespeare, media and technology history and the theory and history of gender studies. She has taught at Humboldt University Berlin, the Hochschule für Schauspielkunst Ernst-Busch and Ludwig-Maximilians-Universität in Munich.

ERICH SCHNEIDER (Light Designer) Is a lighting designer and the head of the lighting department at the Schaubühne.

SCHAUBÜHNE BERLIN
The Schaubühne was founded in 1962. Since 1999 it has been led by artistic director Thomas Ostermeier. The Schaubühne premieres a minimum of ten shows per season alongside a repertoire of over 30 existing productions.

Starting from the concept of an ensemble theater—consisting of an ensemble of permanently employed actors who essentially have been working together since 1999—the actors, dramatic characters and situations of a play take center stage at the Schaubühne. One of the theater’s distinctive features is a stylistic variety in approaches to directing, which includes new forms of dance and musical theater. The search for a contemporary and experimental theater language that focuses upon storytelling and a precise understanding of texts—both classical and contemporary—is a unifying element. The repertoire encompasses the great dramatic works of world literature alongside contemporary plays from internationally re- nowned writers which, with over 100 world and German premieres over the past 19 years, have been a key component of the theater’s work.

The search for new dramatic forms has benefited from a lively international exchange which has regularly brought the Schaubühne and its ensemble into close contact with other theatrical traditions. Alongside directors such as Thomas Ostermeier, Herbert Fritsch, Milo Rau, Patrick Wengenroth, Mina Salehpour, Lilja Rupprecht, Armin Petras as well as Falk Richter and Marius von Mayenburg—who also work as playwrights at the Schaubühne—the theater frequently offers a platform in Berlin to notable directors from abroad. Productions by Katie Mitchell, Rodrigo García, Simon McBurney and Anne-Cécile Vandalem have recently played at the theater.

Every spring since 2000 the Festival International New Drama (FIND) has given internationally renowned theater-makers as well as new discoveries the opportunity to show their work at the Schaubühne. Thus, FIND not only brings new theater from the most diverse linguistic and cultural regions to Berlin for the first time, but over the years the festival has also become a panorama of the most important productions of worldwide theater creation—always committed to the basic idea of discovering new theatrical forms and texts—be it newly written or collectively developed plays. Since 2011 FIND has been complemented by the FIND plus workshop program, a forum for acting, directing and dramaturgy students from several European countries and the U.S..

THÉÂTRE DE LA VILLE-PARIS
Positioned as a “city theater open to the world,” Théâtre de la Ville-Paris is one of the most important theaters in France, and is world-renowned in contemporary theater, dance, and music. Théâtre de la Ville-Paris is dedicated to the creation and staging of modern and contemporary works, fostering the growth of young artists, supporting the production of master artists and works, pursuing the spirit of creation for audiences of all ages, and promoting a wide variety of French and international works. It is distinctive in the performing arts field in France, in Europe and even in the world. In addition, Théâtre de la Ville-Paris also has its own theater troupe. The theater works directed by the director of the theater, Emmanuel Demarcy-Mota, constitute the core repertoire of this troupe. Each of his new works was well received by the audiences, and the troupe is invited to tour regularly at major theaters and international festivals around the world. Representative works include especially Rhinoceros by Eugène Ionesco, Six Characters in Search of an Author by Luigi Pirandello, and The Crucible by Arthur Miller, among others.

Thank you for your support!

WHO KILLED MY FATHER  PRODUCTION SUPPORT

For a full list of St. Ann’s Warehouse’s supporters, click here. Thank you for your generous support!