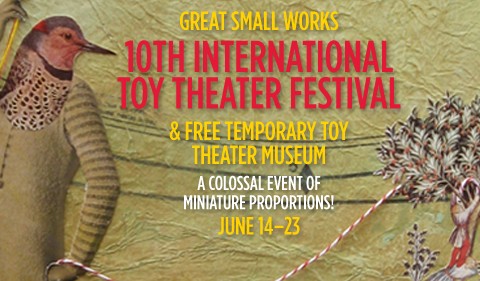 Once again, Great Small Works transforms St. Ann’s Warehouse with its biannual epic event on the smallest of scales!  A diverse range of miniature theaters from around the world and around the block, the Toy Theater Festival celebrates the rediscovery of an all but lost Victorian theatrical form. For ten days, an eclectic lineup of tiny productions will make their­ home at St. Ann’s Warehouse along with the Temporary Toy Theater Museum, a free exhibition of old and new intricate, fantastic, and functional miniature tabletop stages.

Back to 2012-2013
The tiniest blockbusters in town… a wonderful array of new, experimental and traditional toy theater productions.
—The New York Times