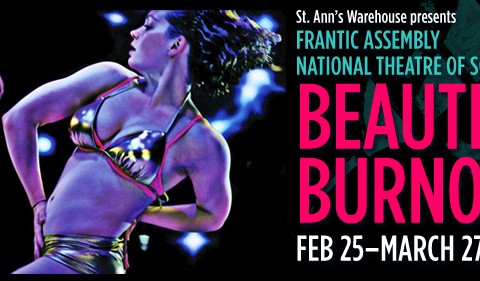 Inspired during St. Ann’s acclaimed engagement of Black Watch, Frantic Assembly and National Theatre of Scotland’s Beautiful Burnout is about the soul sapping three-minute rounds that determine which young men become gods and which gods become mortal. Conceived by Frantic Assembly directors, Scott Graham and  Steven Hoggett, and written by Tony-nominated playwright Bryony Lavery (Frozen),Beautiful Burnout was instigated by Hoggett’s observations of young boxers in training at Brooklyn’s famous Gleason’s Gym, where he became intrigued with both the beauty and brutality in the movement and distress of the live boxers. It resonated with the authentic drilling and soldiering he explored so brilliantly as choreographer of Black Watch, coupled with similar issues among working class youth seeking transcendent ways to escape, in this case, through amateur fighting. Set in a Glasgow boxing ring, with a powerful soundscape by Underworld, Beautiful Burnout is a stunning immersion in the visceral world of boxing that “surely, is the closest that dance-drama will ever come to the contact sport itself.” (The Independent)

Beautiful Burnout is funded in part by the National Endowment for the Arts and the Robert Sterling Clark Foundation.

National Theatre of Scotland is supported by the Scottish Government.

Back to 2010-2011
—2010 EDINBURGH FESTIVAL FRINGE FIRST AWARD WINNER!
This is stunning. Literally and metaphorically.
—Independent on Sunday
This is spectacular, lyrical, and thought-provoking…and features a series of performances so eloquent, and so blazingly committed, that they sometimes leave the audience gasping.
—The Scotsman
Learn more about Beautiful Burnout
WATCH THE TRAILER OF BEAUTIFUL BURNOUT
LEARN HOW THE CAST TRAINED FOR THE SHOW
LEARN ABOUT THE SOUND DESIGN FOR THE SHOW