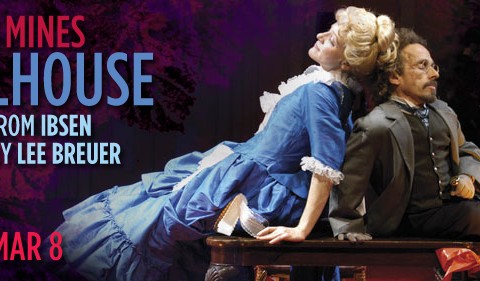 Mabou Mines DollHouse will return to New York, c­ompleting a 30-city world tour that began five years ago with its award-winning premiere at St. Ann’s Warehou­se. With their adaptation of A Doll’s House, Obie Award Winners Lee Breuer (Best Direction) and Maude Mitchell (Best Actress) transform Ibsen’s bourgeois tragedy into high comedy with a deep bite. In the tradition of Breuer’s other deconstructed classics – Gospel at Colonus andPeter and Wendy — Mabou Mines DollHouse is on a political track that speaks not a word of politics. Breuer turns Ibsen’s mythic feminist anthem on its head by physicalizing the equation of Power and Scale. The male characters are played by actors whose heights range from 40 to 53 inches, and the women by actors almost 6 feet tall. Nothing dramatizes Ibsen’s patriarchal point more clearly than the image of these little men dominating and commanding women one and a half times their size.

Presented by St. Ann’s Warehouse in association with Piece by Piece Productions

Back to 2008-2009
Ibsen will never be the same again…A sensational performance by Maude Mitchell.
—The London Times
Lee Breuer is a wizard-director…The whole experience is so fascinating – thrilling here, confounding there – that it must be seen.
—The New York Times
Above all do not miss Mabou Mines DollHouse. It is what one searches for, night after night…
—Le Monde, Paris