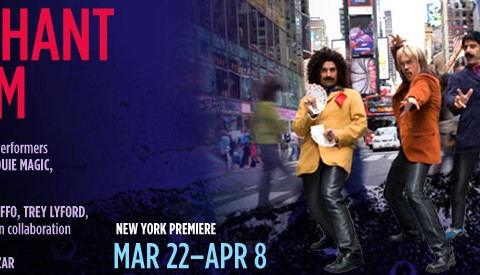 Three magicians. Two acts. One show. Zero boring stuff. Sub-zero intelligence. It’s time to make it all add up… In the Elephant Room.

Illusionists Dennis Diamond, Louie Magic and Daryl Hannah invite you to a place of secrets. Of mystery. The place between the back of your mind and the tip of your tongue. Let’s pretend it’s a room – a real room. And you’re really here. In the Elephant Room. Oh, and by the way – your mind was just totally blown clean through the back of your head. They will confound, amaze, mystify and move you. They’ll leave you slack-mouthed, devoid of any bodily function, your hands twitching from their wrists, a puddle of crushed perception.

This project is partially supported by a grant from Pennsylvania Performing Arts on Tour, a program developed and funded by The Heinz Endowments; the William Penn Foundation; the Pennsylvania Council on the Arts, a stage agency; and The Pew Charitable Trusts; and administered by Mid Atlantic Arts Foundation.

Elephant Room was commissioned by Center Theatre Group in Los Angeles, California, and co-premiered between Arena Stage Washington DC (Molly Smith, artistic director and Edgar Dobie, managing director) and the Philadelphia Live Arts Festival, Philadelphia, PA. Elephant Room is funded in part by the Creative Capital Foundation, the Pew Center for Arts & Heritage through the Philadelphia Theatre Initiative and the New England Foundation for the Arts’ National Theatre Pilot, with lead funding from the Andrew W. Mellon Foundation.  Additional support was provided by Hunter College Department of Theatre and the Live Arts Brewery (LAB) programs, which are supported by the Kresge Foundation, the Independence Foundation, and the PNC Foundation through PNC Arts Alive.