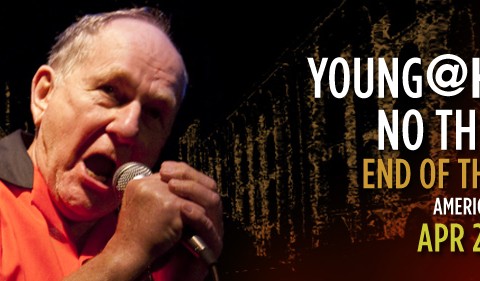 St. Ann’s Warehouse presents the American Premiere of [email protected] in END OF THE ROAD by No Theater, the third part of the Chorus’ musical theater “road” trilogy. End of the Road is an exploration of the power of music to transcend age. The show takes audiences on a journey through the 20th century, with ballads giving way to hardcore rock & roll. Some of the songs are pure fun (“Monkey Gone to Heaven” by The Pixies), while others are tender in the Chorus’ hands (“Handle with Care” by The Traveling Wilburys). A core value for [email protected] can be summed up in one of its famous program notes: “We all have to die. Some of us are lucky enough to grow old first.” They are having a ball and so are their audiences.

The legendary [email protected] Chorus and No Theater have collaborated since 1983, taking the first two stage shows of their trilogy on the road to Europe, Canada and Australia. And while iconic artists such as David Byrne have championed them, End of the Road at St. Ann’s Warehouse will mark the first [email protected]/No Theater production to be seen in America.

Produced by Manchester International Festival, [email protected] and No Theater.

ABOUT [email protected] CHORUS­
Recently featured in the award-winning documentary[email protected] (Fox Searchlight, April 2008), the chorus was formed in Northampton, MA in 1982. Under the direction of Bob Cilman, [email protected] Chorus members typically include those with some prior professional theater or music experience, others who have performed extensively on the amateur level, and some who have never stepped onto a stage prior to turning 80. They are united in their passion for performing rock music. [email protected]’s repertoire is like a set list of rock’s greatest hits, including songs by Coldplay, Sonic Youth and The Clash, capturing the sheer joy of singing as well as the singular poignancy of aging. Some of the songs they sing are fun, like OutKast’s mega hit, “Hey Ya!” Others are a bit sad in their hands, like The Traveling Wilburys’ “Handle With Care.” The elderly voices and their collective sound cause audiences to hear music and lyrics in a way they never have before.

ABOUT NO THEATER
Since 1978 No Theater has performed such works as the original productions of THE ELEPHANT MAN, LAST RESORT, and DUPE at The Performing Garage on Wooster Street in New York and has created new works for the stage in Japan, Australia, San Francisco, Oklahoma City and throughout Europe. No Theater directors Roy Faudree and Sheena See have performed regularly in The Wooster Group productions since 1990. No Theater’s name comes from the fact that for its first 4 years it had no theater, no permanent performance space, but would convert empty spaces into theaters with each of its new productions. ­
Photo by Jeff Derose