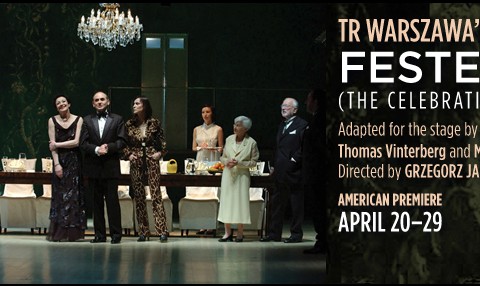 The last time Polish theater maker Grzegorz Jarzyna and his TR Warszawa came to town, they made history with an explosive production of Macbeth, elaborately staged in an outdoor theater we built in the Tobacco Warehouse.This spring TR returns to St. Ann’s Warehouse with the American Premiere of Festen, one of TR’s most famous productions, based on a prize-winning Danish film, The Celebration, made according to the minimalist Dogme 95 principles.

While the story, adapted by screenwriter Thomas Vinterberg, the structure, and much of the language remain true to the film — a family gathers to celebrate the 60th birthday of the family partriarch — “Jarzyna’s production, with its two long tables laid out at right angles, brings to mind not just Chekhov but a whole range of Shakespeare plays: Hamlet obviously, with its theme of buried family secrets, but even more specifically, Macbeth, with the sense of a ceremonial banquet thrown into disarray through the intrusion of ghosts from the past.” – The Guardian

One of Poland’s foremost directors, Jarzyna has revolutionized Polish theater, with a personal vision that boldly reinvents the classics and stages contemporary texts for a younger generation. He has brought a newly energized Polish theater to the streets of Warsaw – to discos, train stations, and underground clubs, and to DUMBO, where St. Ann’s Warehouse has brought two prior TR productions: Risk Everything (2004) and Macbeth (2008).

Supported by The Trust for Mutual Understanding, Adam Mickiewicz Institute, The Polish Cultural Institute New York, and The Embassy of the Republic of Poland in Washington DC.

Performed in Polish with English subtitles