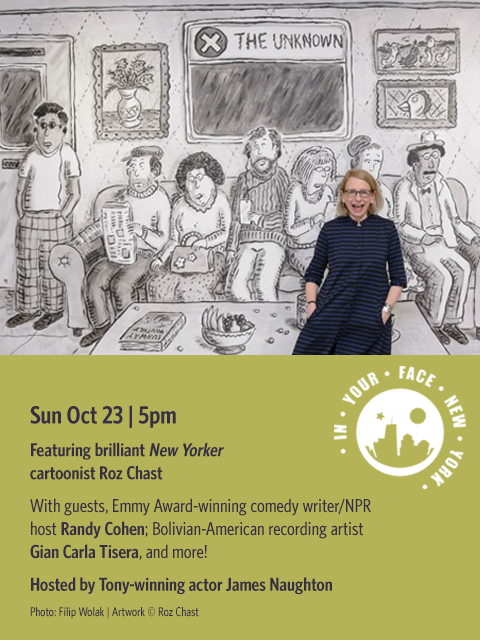 No matter where you live — Honolulu, Beijing or Bushwick — New York is IN YOUR FACE. That’s what this live performance podcast is all about: presenting New York City’s highs and lows through sketches, songs, and monologues that reinforce its reign as the cultural capital of the world. Join us on October 23 for a close-up look at the work of Roz Chast, “the magazine’s only certifiable genius” (David Remnick, Editor of The New Yorker), plus a host of special guests including Broadway star James Naughton, and NPR’s Randy Cohen, who will examine the implications of the coming election in a “post-ethical world.”

Back to 2016-2017
The magazine’s only certifiable genius
—David Remnick, The New Yorker
[Chast’s] cartoons [create] a parallel universe to ours, utterly recognizable in all its banalities and weirdnesses, but slightly askew
—The New York Times