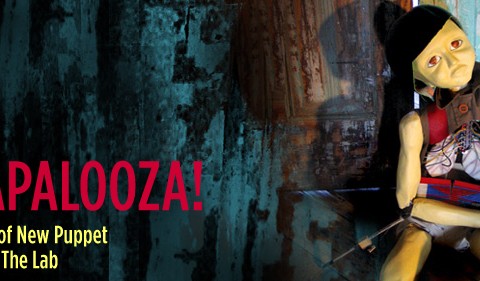 Ring in the New Year with a quirky display of live works-in-progress and stop motion puppet­ anim­ations from The Lab. Now in its 11th year, Labapalooza! embraces new avant-garde puppet works ranging from a 19­th Century Italian sleepwalker to a space pioneering monkey; from Ralph Waldo Emerson to Jewish mysticism.

Are you a member?
To become a member starting
at $50

ON THE WING by Alan Barnes Netherton
A puppet show heroizing the immigrant in all of us.

THE DEMON BRIDEGROOM by Andrea Dezso
with Original Score by Jeremiah Lockwood
A 15 minute stop motion puppet animation inspired by Eastern European Jewish mystical folk tales. A young factory worker getting ready for her wedding encounters a mysterious stranger. The film is set in an imaginary town from pre-war Romania and it explores the illusory nature of time, space and human experience. Supported by a grant from the Six Points Fellowship for Emerging Jewish Artists, a partnership of Avoda Arts, JDub Records, and the National Foundation for Jewish Culture, and made possible with major funding from UJA-Federation of New York.

AMERICAN STUDIES ­by Karinne Keithley
A stop motion animation of a lecture by Ralph Waldo Emerson in a puppet auditorium made entirely of altered books. Featuring the voice of Scott Shepherd reading Emerson, and Karinne Keithley singing a song of compensation.

HOPE by Kirjan Waage and Gwendolyn Warnock
Based on actual rocket launchings in the 1940’s and 1950’s,HOPE is the story of a monkey and a mouse, two early space pioneers, who were launched into “the great unknown.”

THE MUD ANGELS (an emergence of forms) by Luis de Robles Tentindo
Explores memory, loss, and transformation – through the destruction and miraculous restoration of the written treasures of a society. The central figure, a book restorer, is one of a dying breed – the kind whose painstaking labor of love is completely overlooked by others. The piece integrates movement, various puppet styles and installation elements to unfold a series of both abstract and literal scenarios.

POLIO JITTERBUG by Hangnail Productions: Alison Dilworth, Justin Gebhard, Devin Greenwood and Miriam Jones
A boy, afflicted with polio and confined in an iron lung, embarks on a flight of fancy and finds ultimate release in the power of human empathy.

SONNAMBULA by Michael Bodel
Presents an amalgam of puppets, contraptions, choreography and opera that delves into the eventual reduction of everything to nothing, inspired by Bellini’s mysterious opera.

THE NEXT TO THE LAST POEM by Patti Bradshaw
Scholars say [poet] Fernando Pessoa developed numerous “heteronyms” (his word) who interacted with him and with each other throughout Pessoa’s otherwise quiet and shy life. On a rainy night in March 1814, Pessoa wrote upwards of 36 poems in four distinct voices. Our project is an imaginary day before that night.