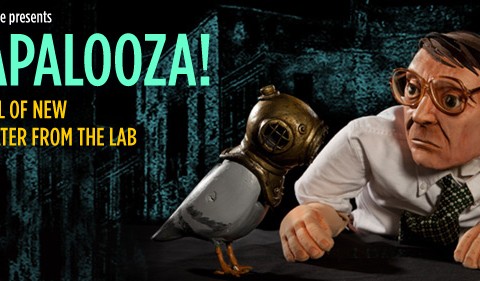 Lobby Installation (both Programs)
Seeing Inside

Funded by the Jim Henson Foundation, the New York City Department of Cultural Affairs and the New York State Council on the Arts

Puppet Theatres in Disguise features a triptych of portable, self-contained puppet theatres hidden within everyday objects. “Seeing Inside” takes place in the skirt of 19th century scholar, Lou Andreas-Salome. “The Time Piece” will unfold in multiple stages from a steamer trunk. The as-yet-un-named Vagabond piece will be revealed upon the opening of a trench-coat.

The adventures of a small, metallic, electronic device in space, who crash-lands on a planet made of egg, and encounters an organic world and locals unlike anyone he’s ever seen. A miniature closed Puppet Theater in the round that is filmed live, and projected on a screen.

VOYAGE TO THE SKIES

Written and Directed by Tom McDonagh

In 1785 two unlikely companions, Dr. Jeffries and M. Blanchard, lifted off from the cliffs of Dover, England in an experimental hydrogen balloon. Their search for terra firma on continental soil descends into calamity as a feathered foe orchestrates a cunning attack to sink the men into the breakers below. This short shadow play, paying homage to Buster Keaton and the art of the silent comedy cinema, will keep all in suspense.

In wandering pursuit of a peculiar and illusive calling our hero, a sheep, follows the perilous path between here and there hoping to discover her purpose and find the others at the end of the line.

FAR FROM THE TREE

Written and Directed by Retta Leaphart

Inspired by family secrets, the idea of inheritance, and the loss of many Western forests to the Mountain Pine Beetle, this piece follows one child’s quest to protect her beloved orchard.

Written and Performed by Daniel Burnam and Erica Livingston
Interference and Collapse revolves around the death of Sam Cooke, the famous R&B singer, and uses that tragedy as a catalyst to explore death, grief and loss in a quantum world of uncertainty and possibility. Incorporating synesthesia, a layman’s understanding of quantum mechanics and three turntables, Interference and Collapse weaves in and out of live projections of tiny worlds and larger scale theatrical stage pictures relating this change in scale to the paradoxical feeling of proximity/distance we feel in personal tragedies such as the death of a loved one and historical tragedies like the death of Sam Cooke.

A Bunraku style puppet piece about obsessive compulsion,  pigeons and the end of the world. With original music by Freddi Price.

SEND FOR THE MILLION MEN, excerpts: THE ANARCHISTS’ BOMB AND THE LETTER “S”

Conceived and performed by Joseph Silovsky
Send For the Million Men presents the stories of Sacco and Vanzetti, two anarchists executed in the 1920s for a payroll robbery in Braintree, Massachusetts.  With the help of Stanley the Robot (narrating as Vanzetti), Silovsky will show two scenes using OP projections and toy soldiers, concentrating on an anarchist bombing that predated the crime, and a letter, written by Vanzetti, just before his execution.

In this noir-style radio drama, Foley sound effects are brought to life as found-object puppets. Follow Brick Foley, a bitter old detective, as he investigates a series of murders at the Helen Keller School of Music.