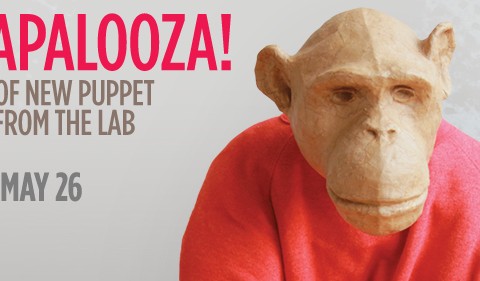 Each spring, St. Ann’s Warehouse presents LABAPALOOZA! A Festival of New Puppet Theater from The Lab, showcasing the work developed over the year in our PUPPET LAB. Now in its 15th year, the Puppet Lab is St. Ann’s Warehouse’s experimental haven for artists developing interdisciplinary puppet and object theater projects. This year’s festival of their works-in-p­rogress brings you irresistible stories that epitomize the magic of puppetry with tales of sinking ships, monster sightings, dream anthologies and more.

PUPPET LAB GALLERY
(Open one hour before curtain, both programs)
A display of puppet models and prototypes from this season’s Puppet Lab participants.

FILM TRAILERS BY ROBIN FROHARDT (At the beginning of each performance)

Point Pleasant by Daniel Patrick Fay and Andrew Livingston
A reenactment of the Mothman monster sightings which occurred in Point Pleasant, West Virginia between November 1966 and December 1967.

The Completely True Tales of Boris the Peacock by Randy Ginsburg
A cranky, Russian conductor peacock is found hiding in exile in London. Forced to recount his past in order to seek asylum, he becomes a “Scheherazade of the visa,” wooing border control officers with his vibrant and operatic history.

Essex by David Commander
A toy theater piece which draws a parallel between the 1819 sinking of the whaling-ship ESSEX by a sperm whale and the dangerous backlash of overtaxing the Earth’s resources.

Before and After by Misty Foster, Lacy Lynch and Yuliya Tsukerman
By the light of a buzzing TV, everyday objects come to life. A broken bicycle wheel spins, cardboard boxes hide creatures in the dust, and Christopher pieces together the moment when it all went wrong.

Chimpanzee by Nick Lehane
A female chimpanzee in a biomedical facility, nearing the end of her life, remembering and coming to terms with her time as a child in a human family.

The Lab is funded by The Jim Henson Foundation, the New York City Department of Cultural Affairs,­ and the New York State Council on the Arts