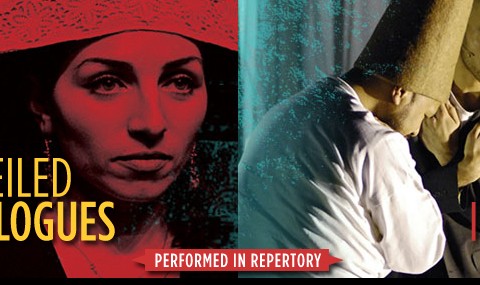 The Veiled Monologues and Is.Man bring audiences inside Islamic immigrant culture with their intimate portraits of Muslim women and men living in Holland. Intermixing live music, dance and film, Adelheid Roosen has transformed hundreds of personal conversations into two moving productions, to be performed in repertory and in English for the first time anywhere.
THE VEILED MONOLOGUES

“an hour and a half of stories and music…ending in ovations and a sense of happiness.” (De Groene Amsterdammer)

Performed across Europe, the Middle East, and before the Dutch Parliament, The Veiled Monologues is a vital, surprising, and poetic portrait of love and relationships under Islam. Created from the collected testimonies of women born and raised in Saudi Arabia, Kuwait, Somalia, Pakistan, Iran and Iraq – this production has been praised as, ” of a rare intensity. It feels like a privilege to actually look into the depths of a Muslim woman…” (De Telegraaf, 2003)
IS.MAN

“Theatre at its best and most beautiful…I left the theatre a broken man. Couldn’t say a word for hours. Could not get the images, the music, the stories and the invocative Dance of Heavens…out of my head.” (De Groene Amsterdammer)

Is.Man unveils the secretive world and complex motivations that underlie the tradition of honor killings in some Muslim societies. Based on her interviews with men convicted of the crime in Holland, Roosen has created “a gripping story” (De Telegraaf)about three generations of men struggling with namus, a family’s honor in relation to the sexual integrity of its women, while living in a contemporary society. This compassionate play both startles and surprises. It will “destroy your hearts as the night progresses [and] …leave you shivering from head to toe.” (De Groene Amsterdammer)

“This type of work is the reason why live theatre is still relevant. The information gets transmitted and the message, vision, story or whatever is received first hand and deeply. The story telling was terrific and a pleasure to watch. It was not over the head preaching but a more subtle way of communicating, allowing our own brains to play along and discover whatever the piece was trying to convey. And the post show q and a section with the exceptional director and writer of the piece was a real treat. Great work. Both, my brain and my heart have opened more because of it. Thank you.”

“Wonderful performance by Idilbi. Enjoyed musician very much as well. Strong piece. Left me with all kinds of feelings – more understanding but also more anger. What a subject!”

“The actresses, the content of the performance as well as the music were all phenomenal. A wonderfully intimate glimpse into the lives of the women who agreed to be interviewed. It was a privilege to experience this performance.”